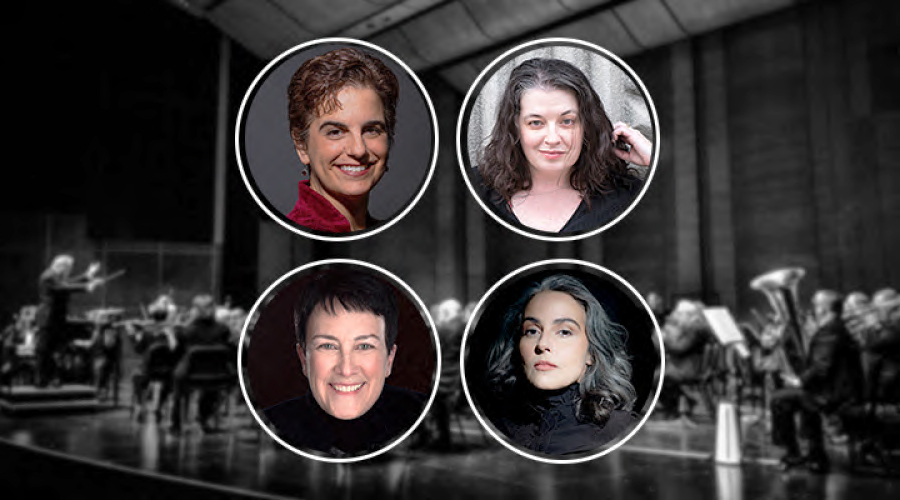 GREEN BAY, Wis. (WFRV) – A Concert in a League of Their Own: The Weidner Philharmonic’s “Women’s Work” performed Saturday night at The Weidner’s Cofrin Family Hall at the University of Wisconsin in Green Bay.

+ Works only by living composers.

+ Three of the composers are present, and the fourth is represented by a work that received its world premiere in the room.

+ A composer sings as part of her orchestral work, including directing the audience in voice as part of the experience.

+ The chancellor of the university directs three of the four works on the program.

+ Three of the four works are new to the performance in Green Bay.

+ All works are composed by women.

+ One of the composers teaches at the UWGB.

+ The works revolve around light, a natural disaster, our pandemic and football – music as description… thought and feeling expressed in a myriad of multicolored notes for the vast landscape of an orchestra, interpreted as one by humans.

The evening opened with the rare opportunity to explore the minds of three composers in a single session. Clarice Assad, Michelle McQuade Dewhirst and Stacy Garrop gathered in the adjoining Fort Howard Hall. Sponsored by The Weidner and the UWGB Institute for Women’s Leadership, the discussion was moderated by Kelli Strickland, Artistic and Executive Director of The Weidner.

A key point: female songwriters continue to work hard in the elevated environment of high-profile music.

Stacy Garrop and Michelle McQuade Dewhirst said it helps – in day-to-day communication – to “speak and think like a man to ease entry” – like learning more about football (Garrop) or not just drinking beer but know how to brew (McQuade Dewhirst) because “you kind of have to speak the language a bit to fit in”.

Clarice Assad pointed to a difficulty that the vast majority of composers today have in the mind of the public: “Living, breathing”. Or: The only good composer is a dead composer.

Stacy Garrop spoke about her quest for her music to play a role in society. Michelle McQuade Dewhirst relishes the extension of music’s parameters beyond its class role, sharing thought on a grand scale. Clarice Assad is particularly expressive, visually in conversation and on stage as a composer-singer.

These composers are very lively and create with strong voices, as evidenced by their works on Saturday’s program.

During the concert at Cofrin Family Hall, Michael Alexander opened with some stats from his day job as UWGB Chancellor. One is that 60% of UWGB students are women.

He noted that dedicating a concert to living female composers is special. He imagined a day when it’s not special.

The printed program for “Women’s Work,” compiled by musicologist J. Michael Allsen, professor emeritus of UW-Whitewater, not only covers the biographical basics, but provides listening tips under the title “What You’ll Hear “.

A. The first performance was a work by Jennifer Higdon, which the Green Bay Symphony Orchestra premiered in 2007 during a peak of creativity. Jennifer Higdon’s caliber is demonstrated by this: Pulitzer Prize in 2010 for a violin concerto.

“Light” received a special introduction. The work is based on a poem by the late Wisconsin Poet Laureate Ellen Kort. Charles Rybak, professor of English at UWGB, recounted a search to find the poem through Ellen Kort’s daughter, who was present. After Charles Rybak read a passage ending with the image of a life turned into a shadow, the audience fell silent.

The work creates an aura of mystery and mystique with moments of brilliant energy, like the rays of the sun on a clear day.

Of them. History as music.

Imagine a cataclysmic volcano of 1883 like 21st music of the century for percussion and strings only.

Stacy Garrop’s three-movement “Krakatoa” features the power of percussion with the emotion of the viola in a central role.

Stacy Garrop created a circular motion for the violin bows for added tension. An alto-percussion “duet” feeds a feeling of imminent danger. And a viola-cello “duet” touches on melancholy. Sometimes the strings seem to moan.

Three. Music as what we’ve been through – the COVID-19 pandemic.

Michelle McQuade Dewhirst’s compositional imagination comes to a head with an effect for the strings – quickly drawing the bow across a string while raising the left hand to the neck, resulting in a harsh, high-pitched “WEEP” sound. Now, Michelle McQuade Dewhirst’s instrument is the French horn, all in metallic ringlets and golden gleam in the eye. Its intelligent sonic dynamics for the strings enhance the originality of “Out of Dark Waters, This”…and can speed up trips to the instrument repair shop.

The music – uncertain and stripped down and searching at first leading to uproar then rhythm with a beat and finally a release – expresses what so many people have experienced and felt. Fascinating.

Clarice Assad draws on the Brazilian part of her life experience for “É Gol! – football speaks for “It’s a goal!”

The orchestra fits in, Clarice Assad sings sounds, not words, via an electronic voice processor and the projection of projected images that include instructions for the audience to follow the Do-re-me-fa-sol scale -la-ti-do.

Everything is much more complex than this sentence.

But Clarice Assad is a communicator.

Through looks and gestures, she understood Michael Alexander as he led the orchestra through brilliant music composed by Clarice Assad. Through voice, eye expression and hand/body language, Clarice Assad enticed the audience to join in the sounds or actions. This stack included whoosh sounds, whispered nonsense, finger snaps and hand claps to create raindrops and varying volumes to vocal responses. To tease, Clarice Assad asked the audience to follow rapid, veering, rising/dipping vocal sounds that she let fly to mimic the samba zip.

All in all, Jennifer, Stacy, Michelle and Clarice make music in a way that Ludwig, Wolfgang, Johann or Johannes never imagined, let alone Pyotr, Sergei, Felix or Frederic and so on.

The concert attracted the interest of musicians, consisting of professors from the UWGB, as well as many orchestras and campuses in the region. The band played with a sense of eagerness for the roads less travelled.

The collaborative effect was particularly visible when Michael Alexander, in black concert attire rather than a chancellor’s garb, coordinated with Clarice Assad’s impromptu suggestions to direct the reactive musicians in bursts of spontaneity.

Phew, in addition to being in a separate category, the concert was something else.

+ “Out of Dark Waters, This” (world premiere) – Michelle McQuade Dewhirst

NEXT: “The Nutcracker,” with the Northeastern Wisconsin Dance Organization, Nov. 25-27.

THE PLACE: Cofrin Family Hall is one of three performance spaces at the Edward W. Weidner Center for the Performing Arts at the University of Wisconsin in Green Bay. At its maximum capacity configuration, the room can accommodate 2,021 people on its three tiers of maple and burgundy seating. Inaugurated on January 15, 1993, the hall was built to accommodate the needs of orchestral concerts, operas, musicals, plays, and organ, band and choir concerts. For acoustic properties, wood is emphasized on seating, mezzanine and balcony surfaces, and walls near the stage. Many surfaces are curved to help shape the sound. The wood is also featured for an aesthetic reason – a “from here” aura of wooded northeast Wisconsin.

THE PEOPLE: The Cofrin name is largely associated with A. E. Cofrin, founder of Fort Howard Paper Co., and his son, Dr. David A. Cofrin, who was instrumental in building the Weidner Center through donations from several millions of dollars. A friendship developed between David A. Cofrin (1921-2009) and Edward W. Weidner (1921-2007), the beloved founding chancellor of the UWGB. Weidner spoke slowly and carried a big idea. Weidner arrived when there were no buildings on the current campus on hills near the shore of Green Bay. His interests ranged from academia to birdwatching to sports. He liked to build projects. It was in his blood. He guided the construction of the Weidner Center, so named from the start of construction. Weidner admitted that his eyes once gushed while driving to a show and seeing a green sign along the freeway: WEIDNER CENTER.