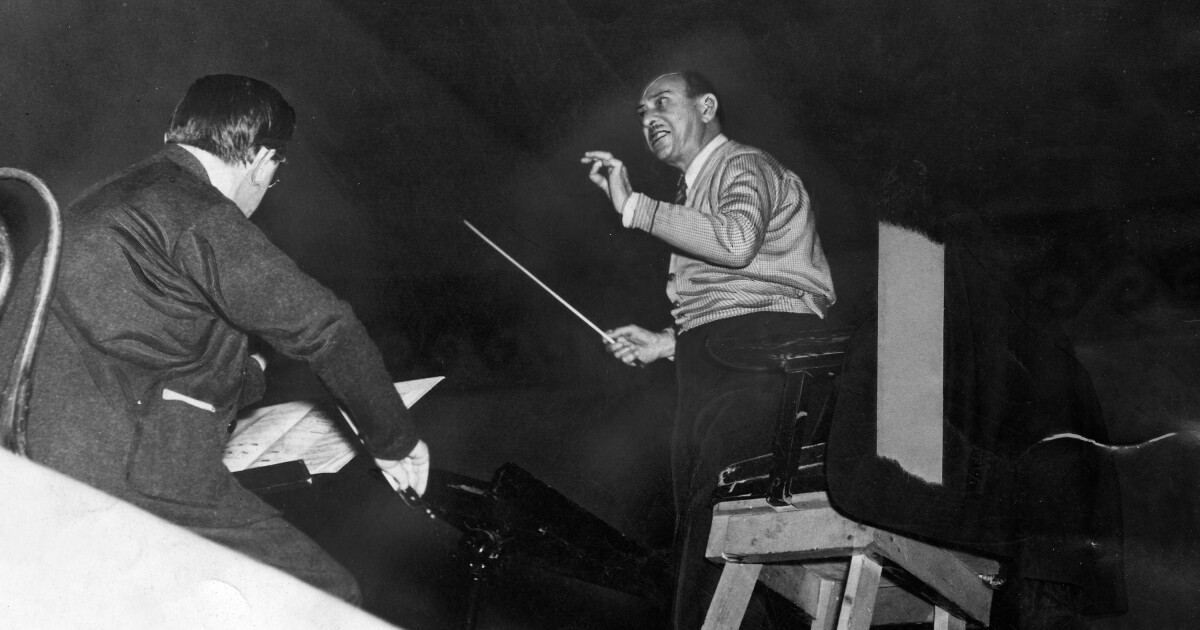 In 1934, the talented young composer Franz Waxman was working for the legendary Berliner Union Film Ateliers studio in Berlin. His career was booming. But trouble was brewing. “The head of production was a man named Erich Pommer,” recalls his son John William Waxman. “When Hitler fired him and appointed Joseph Goebbels, who was Propaganda Minister, to head production, the writing was clearly on the wall.”

Shortly after, the Jewish Waxman was beaten in the street by Nazi thugs. “He got up, dusted himself off, went back to the apartment and said to my mother: ‘I’m packing my bags. Look when the next train leaves for Paris'”, says his son.

Alice and Franz Waxman were two of the tens of thousands of German and Austrian émigrés who would leave Europe from World War I to the rise of the Nazis and World War II. They first fled to Paris, staying in the same hotel as future Hollywood legends Peter Lorre and Billy Wilder (Waxman would later win his first Oscar for “Sunset Boulevard”, composing the score for the masterpiece by his friend Wilder).

During World War II, LA was a sunny sanctuary for European artists and intellectuals. Find out how the Exiles creatively set the stage for the film industry in this episode of “Lost LA.” Check out this preview.

The Waxmans quickly traveled to Hollywood, where many of their fellow émigrés had fled, and set about building relationships in the bustling living room of German-born actress and screenwriter Salka Viertel.

“My parents were new to LA and this environment, and they’re introduced by Salka, and then introduced to this man who’s screaming, ‘Oh my God, I’ve been looking all over the world for you. I saw “Liliom” and you are the composer of my next film,” recalls John Waxman. “‘I want you to come to the studio after the holidays and I want to show it to you.’ Well, my dad would have written a Mickey Mouse cartoon; I mean anything to stay in the United States. So he’s, ‘Of course.’ The director was James Whale, the movie was ‘Bride of Frankenstein”.”

Whale had been captivated by Waxman’s innovative work on the 1935 French film “Liliom” (later adapted as the American musical “Carousel”), starring Charles Boyer. He was particularly taken with a scene where Boyer’s character dies and rises to heaven.

“To mark this scene, my father went to a concert hall called Sainte Traelle and they have a big dome in this concert hall,” says his son. “So he said to the engineers, ‘Look, guys, is there a way to put a microphone on top of this dome because I want this music that we’re about to record to come from away? , from a heavenly place.’ So it was this effect that caught the attention of James Whale, and it was then that he knew that Waxman was the composer of “Bride of Frankenstein”.

Waxman’s explosive and disturbing score was just the first of an illustrious career. Nominated for twelve Oscars, he will compose iconic scores for classic films like “Rebecca”, “Sunset Boulevard”, “A Place in the Sun”, “Stalag 17”, “Rear Window”, “Suspicion” and “Peyton Place”. He also founded the Los Angeles Music Festival.

But not all émigrés fleeing Hitler were so satisfied with working in films. When famed composer Arnold Schoenberg, creator of the influential twelve-tone system, arrived in Los Angeles, he soon realized working in movies wasn’t for him after an awkward encounter with MGM producer Irving Thalberg. . According to the Boston Globe: “When Schoenberg met Thalberg, the producer complimented the composer on his ‘beautiful music’; the composer countered with ‘I don’t write ‘beautiful’ music.'”

But many Austrian and German émigrés would have no qualms about working in American films, joining the roughly 1,500 refugees who would help modernize and artistically elevate the film industry from the 1930s to the 1950s.

“First there were the directors: Fritz Lang, Robert Siodmak, Otto Preminger, Max Ophuls, Fred Zinnemann, Billy Wilder,” writes Tim Robey in The Daily Telegraph. “But there were also the composers, who left an indelible mark on the art of film music – and in many ways took it to its zenith. It was music designed to fill the palaces of cinema of yesteryear – and the movies – with the emotional burst the impact demanded by the studios.”

One such composer was prolific Austrian three-time Oscar winner Max Steiner, who wrote iconic scores for such classics as ‘Casablanca’, ‘Gone with the Wind’ and ‘The Treasure of the Sierra Madre’.

Max believed that the music could sit beneath the dialogue, working with the film to enhance and amplify the emotions, the characters, the drama of the moment.

“A very important point to make about Max Steiner was that he was truly a trailblazer,” NPR music producer Andy Trudeau told Weekend Edition in 2000. “Max believed that music could sit under the dialogue, working with the film to enhance and amplify the emotions, the characters, the drama of the moment. It was a pretty radical idea, because before Max really came into the picture, film music was limited to titles main ones, some source music in the body of the score and something to Max said, “If I can dive into some of these scenes, I can really do things.” And he really proved his point with a movie called “King Kong.”

Another innovator was former child prodigy Erich Wolfgang Korngold – who composed swashbuckling classics like ‘The Sea Hawk’ and ‘The Adventures of Robin Hood’ and ‘Captain Blood’ for Errol Flynn. “His approach to the medium was primarily theatrical and lyrical (he once described ‘Tosca’ as ‘the best film score ever written’),” writes IS Mowis on IMDB. “A master of technique, credited with ‘inventing’ the syntax of orchestral film music, he composed on the piano with projectionists performing reels at his request.”

But despite Korngold’s huge success in Hollywood, his reputation as a top songwriter will suffer, as many criticize his choice to sell his soul to the studios. “He was no longer recognized as a serious composer in the classical world and was no longer accepted there,” violinist Daniel Hope told Deutsche Welle.

But many German emigrants, well aware that they needed money to survive in a new country, and that they also needed to nourish their artistic soul, were happy to make their own film scores. Frederick Hollander, already respected in Berlin for his work on Marlene Dietrich’s classic “Blue Angel,” scored films such as Billy Wilder’s “Destry Rides Again” and “Sabrina.” During his exile in Hollywood, composer Bernard Herrmann’s energetic and daring work on “Citizen Kane”, “Psycho” and “Vertigo” would contribute to the films’ iconic status.

However, some émigrés who had fled persecution would also find themselves persecuted in America. Hanns Eisler, who escaped the Nazi regime in 1933, was nominated for the Oscars for his work in “None but the Lonely Heart” and “Hangman Also Die!” In 1947, he was expelled from America during the Communist witch hunt, despite the fact that, as Mark Swed of the Los Angeles Times notes, Eisler was a Marxist but never a card-carrying member of the Communist Party.

For John William Waxman, the remarkable ability of these traumatized immigrants to not just survive, but to help transform Hollywood music is not only remarkable, but a testament to their talent, courage and adaptability.

“If you sing the song ‘San Francisco’, it’s Bronislaw Kaper. If you hum the theme to ‘Rawhide’, it’s Ditmitri Tiomkin, who was Russian, but also had to escape. So these composers adapted their talent and became all-American citizens and wrote the epitome of American music. I mean, “Get ’em out, get ’em out, rawhide!” What’s more American than that?”