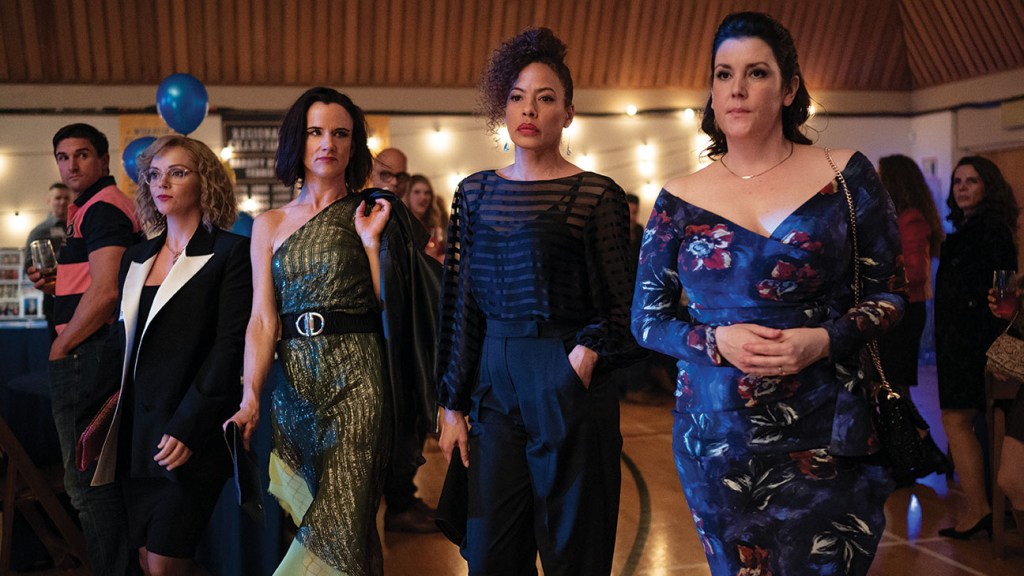 For Showtime yellow jackets, composers Craig Wedren and Anna Waronker were tasked with crafting the brooding score for the thriller series, which heightens the tension for the show’s more noxious sequences in which a high school football team struggles to survive in the wilderness after that their plane crashed en route to a national tournament in 1996. Wedren and Waronker, lead singers of 90s rock bands Shudder to Think and That Dog respectively, also returned to their alt-rock roots to record the the show’s theme song, a ’90s pastiche that channels the emotional furies that survivors – now adult women these days – wrestle with as they navigate the traumas of their teenage years. The couple spoke to THR about their enthusiasm for the project and the joy of experimenting with new – and old – sounds.

How did you get on board to score yellow jacketsand what excited you the most?

CRAIG WEDREN [Executive producer] Karyn Kusama got in touch and sent me the pilot. I was pulled in two different directions, because you can’t tell from the pilot what the heck this show is going to be – the total hornet’s nest of chaos and mind fucking. My first thought was that Anna and I should do this together. We had talked about doing something dark and bloody and weird.

ANNA WARONKER We needed to panic. And everyone was encouraging us to get weirder. We kept waiting for that other shoe to drop, and it was the opposite. They were like, “Um, can you make it weirder? Can you add weirder to that?

WEDREN It really was a dream. It was a nightmare in the dreamiest way.

How did you approach horror differently from your previous collaborations?

WEDREN Anna and I do a lot of comedy, and comedy and horror are very similar. There’s something similarly rhythmic about it. Americans dread silence, so you want to play the trick of increasing that unease we feel in silence with music.

WARRIOR As the episodes progressed, we were assigned [longer] sequences. We really need to explore weird stuff. Here’s a fun story: we sent the producers [an unfinished track].

WEDREN We just had a technical problem, probably late at night. We were like, “Oh my God, let’s go. Half the track was missing, and it was already pretty –

WARRIOR Very strange. As, breaths. Just the weirdest stuff. And they thought about it a lot. They gave us these really thoughtful notes, and we were like – wait a second.

WARRIOR First off, we totally enjoyed it, but we also thought it was hilarious. It opened the field: “If they are ready to accept that?

The show is set in the 90s and today. How did you balance the two eras in your score?

WARRIOR We both started playing music in the very early 90s. It was quite easy for us to marry the two eras, but also to go back and forth, like when we are with the girls in the woods . There is a different headspace. When we’re in the present day with the adult women, we’ve made it a bit more contemporary, but there’s still a 90s element to it because it’s still the same people. It’s also our aesthetic, and we were encouraged to wring that part out. Craig and I were never in a band together – our bands always crossed. when we [score TV] gigs together, we’re treating it like our band’s new album. We have a chemistry that’s very much like a band, so we can try a lot of new ideas.

WEDREN Somehow the score was able to travel back in time, occupy the weird, haunting time in between. We are both parents of teenagers and we are constantly traveling through time. Our kids remind us of who we were then, as they listen to 90s indie rock which is popular with teenagers right now. Being at our age and parents is already a bit psychedelic.

What was the process behind writing the theme song, “No Return”?

WARRIOR First of all, we love a good theme song for a TV show.

WEDREN We are Gen Xers, we grew up in the golden age of the TV theme song.

WARRIOR When the producers said they wanted to do a long main theme, we were so excited because we knew the visuals were going to be really cool. But initially they wanted a song at the end of each episode.

WEDREN Something that filled the needle drops of the 90s with the score.

WARRIOR We recorded many versions, and they picked one that ends most of the episodes. When they [decided they wanted] a theme song, we got close to those end credits songs. We all loved them and took elements from each. Writing the lyrics was effortless for us. It was just us playing [and find out] what we would do if we were to bring our musical personalities together.

WEDREN There are parts of our musical DNA that we would not have allowed ourselves to give to our bands. There is pride in originality and uniqueness. For my part anyway, I wouldn’t have indulged in Nirvana guitar riffs like in “No Return”. For that, I thought to myself, “Ride the My Bloody Valentine!”

Have your individual musical styles changed since you were in your bands in the 90s? Was it a fun exercise to reinvent your old sound in a contemporary way?

WEDREN It was an invitation to call on our [musical] DNA. It doesn’t require a ton of thought – it requires a lot of experimentation. We were both in bands on tour, as opposed to composing for film and television, where you write something and record it at the same time, then move on to the next project. When you’re in a band, there’s so much muscle memory and repetition. It’s quite natural and reflective, so it doesn’t feel nostalgic. He feels more oblivious.

WARRIOR There’s a level of experimentation that we brought to this project, because it’s horror and it’s scary and you can go anywhere with it. We were able to marry these different parts of our musical journeys together and have them as part of our small group.

Interview edited for length and clarity.

This story first appeared in the June 8 issue of The Hollywood Reporter magazine. Click here to subscribe.