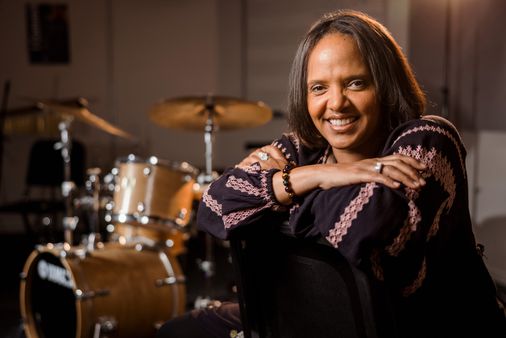 On Friday, Candid Records will be released “New Standards Vol. 1,” an album featuring 11 compositions from the book, performed by a band from Carrington, pianist Kris Davis, bassist Linda May Han Oh, guitarist Matthew Stevens and Nicholas Payton on trumpet, complemented by an array of guest artists.

Get the Big Task

Your guide to staying entertained, from live shows and outdoor entertainment to what’s new in museums, movies, TV, books, restaurants and more.

These last two projects will still be celebrated from October 13 to November 13. 27 with a multimedia exhibit, “Shifting the Narrative: Jazz and Gender Justice,” at the Carr Center in Detroit, where Carrington serves as artistic director. All of this was set in motion through another of the many hats that Carrington wears: that of artistic director of the Berklee Institute of Jazz and Gender Justicewhich she founded in 2018.

“Well, it was the opening of the Institute,” Carrington explains over the phone. “We had an opening event on Martha’s Vineyard at [former Berklee president] Roger Brown’s house. We had two student musicians playing, and I asked them to play songs by female songwriters. Students searched for ‘The Real Book’ [a Hal Leonard book of lead sheets for student musicians]but…came empty.

“That’s when I decided that this had to be our first move – trying to create alternatives to what people can find in ‘The Real Book’.”

Carrington cast a wide net gathering songs and composers for the project, reaching out to composers she wanted in the book and friends for recommendations of composers she might not have thought of. She wanted a mix of songs that students could tackle in high school as well as tracks that could challenge professionals, and tracks that varied stylistically as well. All this gave a multitude of compositions to choose from.

“I mean, we could do 100 of these books,” Carrington notes. “If you just take the characters from the book, they all have a lot of material. And then there were a lot of female songwriters who weren’t included because you had to stop somewhere.

One piece she made sure to include was by her late friend, the great pianist and composer Geri Allen.

“With Geri Allen, ‘Unconditional Love’ has been recorded at least three times. I did it. Dianne Reeves did. Geri did it,” says Carrington. “The funny thing is, when we had this trio with Esperanza and Geri, every night when we played this song, I was like, ‘That’s my goal – to make it a standard.’ ”

This one didn’t make it into “New Standards, Vol. Album 1”. But another one written by an iconic figure, Abbey Lincoln’s “Throw It Away,” did. It’s one of three tracks that stand out on the album for embodying a quality common to so many standards: simple yet powerful melodies with a way of sinking into listeners’ brains.

Melanie Charles and Somi share vocals on “Throw It Away”, with Nȇgah Santos of Jon Batiste’s band Stay Human on percussion, revamping the melody with an intro that evokes a jungle village in need of improvement for the magic quoted in the words of Lincoln. “Moments” by Eliane Elias features Dianne Reeves singing lyrics by Carrington and a bold arrangement, with a sax intro by Ravi Coltrane. Michael Mayo sings “Circling” by Gretchen Parlato, his male voice replacing his own characteristic breathing. All of this is as it should be: standards are made to be reinterpreted.

“Exactly,” confirms Carrington. “You hit the nail on the head. That’s why I made sure everything was at least a little bit different than it was originally.

In the case of Carla Bley’s “Lawns,” as with “Moments,” Carrington herself penned new lyrics, sung in this case by rising star Samara Joy. Coltrane also takes a resplendent solo on tenor sax. When Carrington penned words for “Lawns,” she didn’t realize Kurt Elling had already done it. But his version, titled “Two Hearts (Lawns)” on the album, stayed closer to the original music and the theme of a couple looking back on their lives that is conveyed in an emotional YouTube video featuring Bley herself performing the song as a duet with her life partner, Steve Swallow.

Carrington did not add lyrics to Anat Cohen’s “Ima”, Hebrew for “mother”, allowing the song’s haunting and melancholy melody to convey the song’s emotion. It is played successively by Julian Lage on guitar, Kris Davis (best known for abstract adventurism, but playing this tune straight and with an exquisite touch) and Veronica Leahy – from a three-member woodwind ensemble led by Edmar Colón – on the bass clarinet, the latter touches a subtle but appropriate homage to the clarinetist composer of the song.

“I hate picking my favorites,” Carrington says. “But ‘Lawns’, Samara – It’s just the fact that the song is so beautiful itself and Samara’s performance. She’s a star for me for sure. She really sang so well.

Other tracks on the album are more about freedom and adventure than mere melodies, and Carrington likes them too. Two that come in this vein are “Continental Cliff”, by Berklee de Carrington colleague Patricia Zárate Pérez, and “Rounds” by Marilyn Crispell, the latter recorded live.

Another that Carrington mentions is the tune of Parlato. “I really like the way ‘Circling’ came out,” she says. “I put a lot of work into fixing it. With Gretchen’s music, a lot of people know and love her, so it was important for me to do it differently. Because if anyone wanted to hear that version, they could just stream it.

This “Vol. 1” in the title of this album is not accidental. Carrington would like to see the 101 tracks recorded on the following albums, of which she would not necessarily be the leader.

She also hopes this Detroit exhibit will eventually make its way to Boston, bringing her mix of live music, talk, visual art from the likes of Salvant, Carmen Lundy and Jazzmeia Horn, and the culinary art of Lizz Wright, who in addition to being a top notch singer oversees the menu at Carver 47 on Chicago’s South Side.

The exhibit, says Carrington, “is designed to travel.”