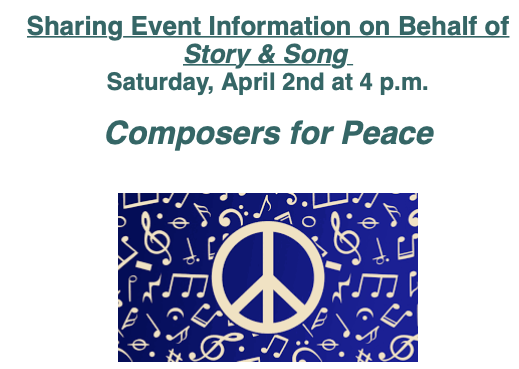 Russia’s invasion of Ukraine floods our screens with images of death and destruction every day. As we watch thousands of people flee their homes, enduring harsh conditions, mourning their losses, we wonder not only what it will take to end this war, but also what we can do to overcome the feeling helplessness.

Spencer McKee, 16, has turned to music, as well as the efforts of World Central Kitchen, a non-profit non-governmental organization founded by celebrity chef José Andrés that has provided millions of meals to Ukrainian refugees everywhere in Eastern and Central Europe. An award-winning pianist, Spencer discovered a composition by Ukrainian composer Nikolai Kapustin and mastered its interpretation. He thought of other composers affected by war or displacement, such as Frédéric Chopin, who fled Poland less than a month before the outbreak of the November 1830 uprising.

This Saturday, April 2 at 4 p.m., the Story & Song Center for Arts & Culture welcomes Spencer McKee, performing “Composers for Peace,” featuring works by Kapustin, Chopin, Samuel Barber, and Ana Leira Carnero. Attendance is free, but you are welcome to donate to World Central Kitchen.

Spencer shows that there are things we can do during times of suffering! Join us as we come together as a community to listen to Spencer’s selections and unite for peace.