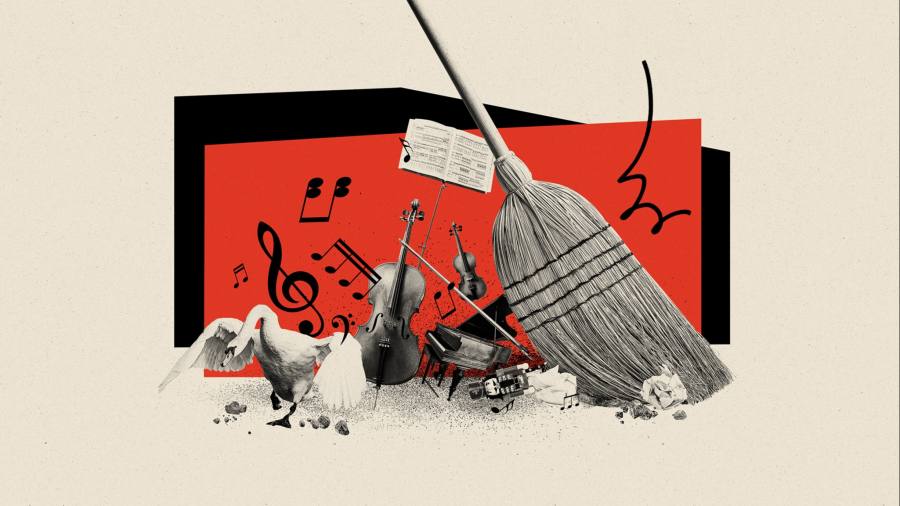 Should Russian composers be banned after the war?

Three weeks ago, a month after Russia launched its invasion, a Ukrainian composer named Yuri Shevchenko died of pneumonia, aged 68. He was trapped in a basement in Kyiv as the city prepared for a possible siege.

His passing might have escaped my notice had I not witnessed a poignant tribute that recently took place in New York. At the premiere of a new Philip Glass Symphony at Carnegie HallCanada’s National Arts Center Orchestra performed a haunting piece composed by Shevchenko, loosely based on the Ukrainian national anthem.

“It’s called ‘We Do Exist’,” Alexander Shelley, the conductor, told the audience. He explained that he decided to perform it before Shevchenko’s death, although it is now a posthumous tribute. It could have been quite moving. But as the melody soared, an unspoken question loomed over the evening: what to do with Russian music, given the horrors in Ukraine?

After all, Russian compositions and performers are an integral part of the world of classical music. So much so that when Shelley created the program around the new Glass Symphony — commissioned to honor the memory of Pierre Jenningsthe Canadian-American broadcaster – it seemed quite natural to include radical Russian compositions.

But following Russia’s invasion of Ukraine, there have been calls for a musical boycott. Many Western institutions have asked Russian artists to denounce the war or to distance themselves from Vladimir Putin. Some of those who refused, like the Russian conductor Valery Gergiev and opera singer Anna Netrebkowere removed from the posters.

Some orchestras have even gone further by canceling performances of Russian music in general. The Cardiff Philharmonic Orchestra rrecently removed Tchaikovsky from his program; Putin replied to this and similar cancellations complaining that no longer performing works by Tchaikovsky, Shostakovich and Rachmaninoff is a form of “cancellation culture”. Other orchestras have continued to play Russian music, arguing that it is useless to censor pieces written long ago. But the questions remain. Does it make sense to ban everything Russian? Or is it a step too far?

Personally, I feel torn: I want to signal my support for Ukraine, but banning music written long before Putin was born seems strange to me. “It’s not easy knowing what to do,” Shelley confessed shortly before the Glass event. His “solution” that night was to include Shostakovich’s Ninth Symphony in the program alongside Shevchenko’s work.

At first glance, it may seem excessively PC to balance a Ukrainian work with that of the famous Russian composer. But, as Shelley explained, the reality is more complex. Shostakovich wrote the Ninth Symphony in 1945, commissioned by Josef Stalin. The Soviet leader wanted a triumphant musical celebration of communist power. Shostakovich’s symphony, however, was dark, sarcastic and melancholic. So much so that Stalin’s henchmen later suppressed it.

Eighty years later, this twist is sometimes forgotten. So, for some, Shostakovich might invoke a sense of Russian pride. However, for Shelley, this particular symphony is a symbol of protest against a repressive regime – and playing it is a sort of tribute to the idea of ​​rebellion. To underscore this point, the Canadian orchestra also performed the Violin Concerto of Erich Wolfgang Korngoldthe Jewish-Austrian composer who fled the Nazis and refused to write music until they were defeated.

Incidentally, the only piece free of any war symbolism that night was Glass’ Symphony, which “proved eccentric, playful, but not necessarily public and overt”, as the New York observed. Classical Review.

What should we conclude from this concert? An obvious point is that the invasion of Ukraine has seeped into the cultural landscape faster than any other geopolitical event that most of us have witnessed.

Another is that music is a complex tool in politics, its meaning depending on the context as much as anything else. Melodies that evoke nationalist pride in one pair of ears may evoke entirely different emotions in another. And that brings us to a third point: there can be hope in ambiguity.

Today, debates over the meaning of performing the works of Ukrainian composers such as Shevchenko, versus those of Russian artists, can seem divisive. They don’t have to be. During the Cold War, Western and Russian audiences relished the music of Tchaikovsky, for example. His melodies created bridges, not barriers. It may be hard to imagine that happening anytime soon. But music isn’t as finicky as politics – and creativity doesn’t have to be a zero-sum game.

So as I left Carnegie Hall that evening, I was glad to have been introduced to Shevchenko’s work, as a show of Ukrainian pride. I was also delighted to hear the sardonic and provocative Shostakovich. If nothing else, it shows that there is so much to celebrate about Russia’s creative heritage. We shouldn’t let Putin smear this, especially now.