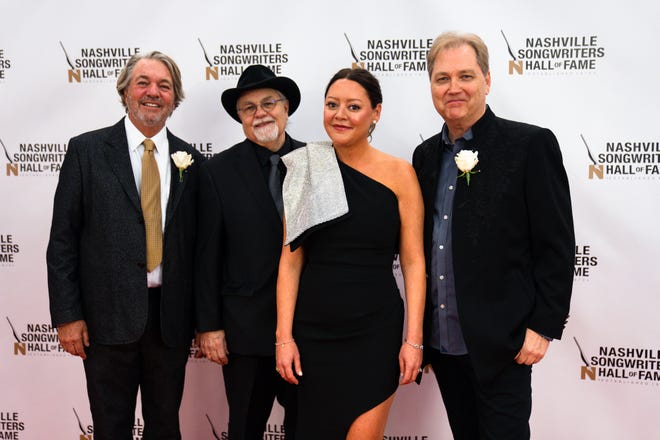 There’s no other night in Nashville quite like this – a chance for Garth Brooks, Carrie Underwood, Keith Urban and Vince Gill to tip their hats to the songwriting talents that helped shape their careers.

These stars were all in attendance at the annual Nashville Songwriters Hall of Fame induction gala, which took place Sunday night in the Music City Center’s Grand Ballroom.

Still, the spotlight remained firmly on this year’s inductees: Hillary Lindsey, Gary Nicholson, David Malloy and Steve Wariner, as well as the late Chips Moman and this year’s most high-profile inductee, Shania Twain.

Twain was unable to attend Sunday’s gala, but expressed his gratitude in a pre-recorded video.

For the other inductees, it was a tremendous opportunity to reflect on a long journey from their hometown to one of Music City’s most esteemed clubs – and the friends, mentors and champions they found along the way. .

Underwood and Urban have teamed up to perform one of each artist’s most popular songs: “Jesus, Take The Wheel” and “Blue Ain’t Your Color.” Both were co-written by Lindsey, a modern Music Row giant who was inducted into the Hall of Fame in his first year of eligibility.

After scoring her first No. 1 20 years ago with Martina McBride’s “Blessed,” the Belmont alumni have continued to work extensively with Underwood, Lady Gaga and Little Big Town, to begin with.

“It’s like a blind date at first,” she told the Tennessean before the ceremony. “And either you have the feeling or you don’t. And for me, that’s kind of what it’s all about. »

Lindsey’s career began just as the music industry was undergoing a digital revolution, and adapting to the streaming market over the past decade has brought its fair share of challenges and frustrations, she said. declared.

“But it never fails. You walk in and you write something and you get goosebumps. And you rekindle the fire.

“I said to him, ‘I’m still waiting for the call, Lee Roy, where they’re going to say, ‘Oops, we made a mistake. We meant (another) Steve. And he said, ‘No, bro , you will not receive this call.'”

It’s safe to say that everyone at Music City Center sided with Lee Roy. Country star and acclaimed guitarist Wariner has written or co-written several of his own hits, including “Holes In the Floor of Heaven”, “Two Teardrops” and “You Can Dream of Me”. He has also co-written hits for Clint Black, Urban and Brooks, and is a member of the Grand Ole Opry and Musicians Hall of Fame.

Brooks took the stage on Sunday to perform “Holes in the Floor of Heaven,” and Wariner was inducted by fellow self-proclaimed country star Bill Anderson.

“I’m living a dream, really,” Wariner said. “That thing when you’re little, in a small town in the cornfields of Indiana, you dream of coming here. I never said, ‘I want to be a star.’ I’ve always said, ‘I want to be involved in making records and writing songs.’ »

Vince Gill took the stage to perform his 1993 hit “One More Last Chance,” which the country star wrote with Nicholson. He had quite a group with him, including Delbert McClinton, Shawn Camp and Michael Rhodes, while Rodney Crowell had the honor of inducting Nicholson.

The occasion caused Nicholson to think back to his Music Row debut. He and Gill had worked together an entire decade before that success, playing guitar on a Guy Clark album produced by Crowell.

“They’re all my most revered heroes to begin with,” he said. “So I was very lucky to land where I landed. … I would tell any aspiring songwriter to develop relationships with great singers. And in my case, there have been a lot of great singers with whom I came to collaborate.

When he was in ninth grade, David Malloy had to write an essay about what he wanted to be when he grew up. His answer ? “Future Nashville Cat.”

The son of Nashville sound engineer Jim Malloy grew up with legends like Roy Orbison at home, and from an early age he knew he was on a different path.

“They were just larger than life,” he recalls. “And I thought, ‘Oh my God, I can’t be larger than life. It’s too much for me. I just want to make music, but I don’t necessarily want to be in front of a whole bunch of people.'”

From helping his father in the studio into A&R, Malloy eventually found his way to songwriting success, especially teaming up with Even Stevens and Eddie Rabbitt for hits like “Drivin’ My Life Away.” and Rabbitt’s “Suspicions”. After Hall of Famer Rhett Akins performed his version of “Drivin'”, Stevens inducted Malloy into the Hall.

“We always felt like a trio,” Malloy said. “Eddie and Even are already here. I feel like the third leg of a three-legged table, and finally, the third leg is in. I can do my part.