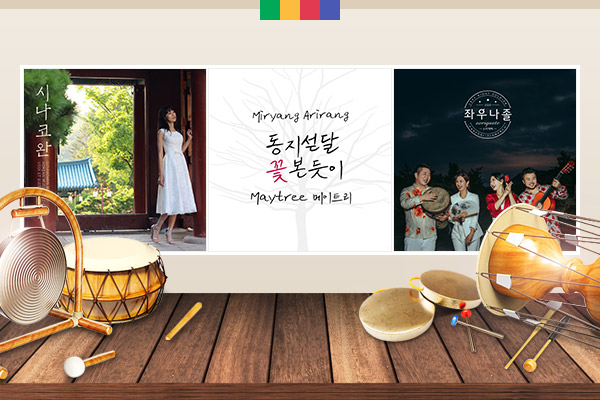 There is an old saying in Korea that says, “Extremely good things are like water. Water changes form in a different environment but still retains its properties. The adage therefore implies that it is best to retain its natural qualities while adapting flexibly to the environment. Even good intentions can undermine the relationship with others if such intentions are imposed. Rather than making changes in others, it could end up hurting themselves. Traditional culture works the same way. It is important to preserve the original form, but it would be more enjoyable for many if the tradition adapted to modern society and naturally integrated into our daily lives. Today’s Sounds of Korea episode will feature modernly rendered folk songs and pansori pieces. The first track is “Doraji”, which means bellflower, sung by SinaKowan Duo.

The Gyeonggi-do folk song “Doraji” sounds different that way, doesn’t it? SinaKowan Duo is a jazz duo consisting of Korean jazz singer Sina and French guitarist Regis Coisne헤지스 코완 and formed in 2007. The two musicians released an album titled “Korean Music Jazz-Folk” in 2017. Fascinated by Korean songs , Regis Coisne reportedly offered to do the album first and even personally arranged and recorded the songs. It’s obvious that he took great care in making this album. Many Koreans were wary of the gugak fusion genre because certain combinations of traditional and modern elements turned out to be quite troublesome. But recently, many integrations of different factors have resulted in quite refreshing and unique works. The following piece is a folk song and a pansori piece sung a cappella. The term a cappella comes from medieval church music. In the Middle Ages, the purpose of church music was to communicate religious meanings, so songs were played without music to make listeners pay more attention to the lyrics. Nowadays, a cappella music refers to a singer or a group of singers performing without instrumental accompaniment. The first track is “Like Seeing a Flower in December” sung by the music group Maytree, followed by a passage from pansori “Chunhyangga춘향가” where government inspector Lee Mong-ryong이몽룡 shows up at the birthday party of Magistrate Byeon sung by Toris.

Like seeing a flower in December / Sung by Maytree

Maytree is an a cappella group formed in 1999. “Like Seeing a Flower in December” was commissioned by the city of Miryang밀양 and the Miryang Cultural Foundation under the Miryang Arirang Globalization Contents Project. Maytree, who wrote the song, is made up of gugak singers and is Korea’s only a capella group specializing in traditional folk songs and pansori pieces. The attributes of regional folk songs are called “tori” in Korean. The group name Toris signifies a collection of characteristics of folk songs from different regions. Today’s final track is “Catch a Rabbit” by Soriquete소리께떼, a band consisting of flamenco guitarist Park Sung-jin, singer sori Jeong Ae-seon, and dancer Choi Yu-mi. The name of the group Soriquete is a combination of the term gugak sori which means a song and the flamenco term soniquete소니께떼, which refers to free rhythm. The pansori tune “Catch a Rabbit” is featured when the rabbit has been tricked by the turtle and taken to the sea god’s underwater palace. guitar. Try to imagine what kind of dance moves go well with such music. Here is Soriquete performing “Catch a Rabbit”.

Catch a Rabbit / Sung by Soriquete

Eva and Emon will sing folk songs in Tribeni tonight