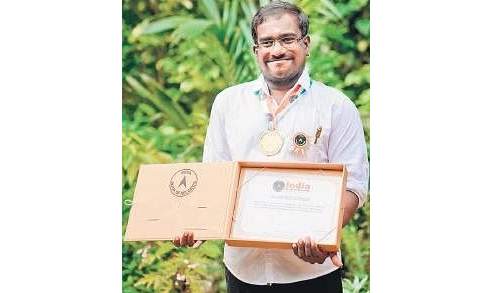 Vishnu KR was three years old when he said his first words. The Thrissur native had a speech impediment since birth, but he never let it overwhelm him. Overcoming all odds, the 25-year-old recently reclaimed a place in India’s Book of Records by singing 10 folk songs in a row for 20 minutes and 13 seconds.

Folk music has been an integral part of his family for generations. “My interest in ‘naadan paatu’ comes from my grandfather who made folk instruments that accompanied folk music performances. Coming across music made by other regional troupes over the years piqued my interest,” says Vishnu.

The youngster’s inclination for folk songs is not just a simple fascination. He wrote five folk songs and expressed his thoughts vividly through 30 poems. Until the age of 20, Vishnu lacked clarity of speech. After undergoing homeopathy treatment, he claims to have improved over the past five years.

“I was unable to pronounce certain words clearly in my childhood, I couldn’t even say my name correctly when I was in the lower grades. With practice and treatment, I started to get better,” he says.

Despite his speech impediment, Vishnu wanted to put his name on India’s book of records. “When I recorded myself singing various folk songs, I had the idea to make videos of them. Due to health problems and shortness of breath, I had to redo them several times. practiced yoga and some breathing exercises, I prepared for the records, thanks to which I could sing 10 songs in one take,” says Vishnu He sang vaimozhi and varamozhi folk songs. vaimozhi tune ts.

This is not Vishnu’s only effort to break stereotypes. The youngster will be known as RJ Ram shortly. His extensive knowledge of folk songs and culture landed him the opportunity to be a radio jockey in an online FM based in Dubai.

Eva and Emon will sing folk songs in Tribeni tonight