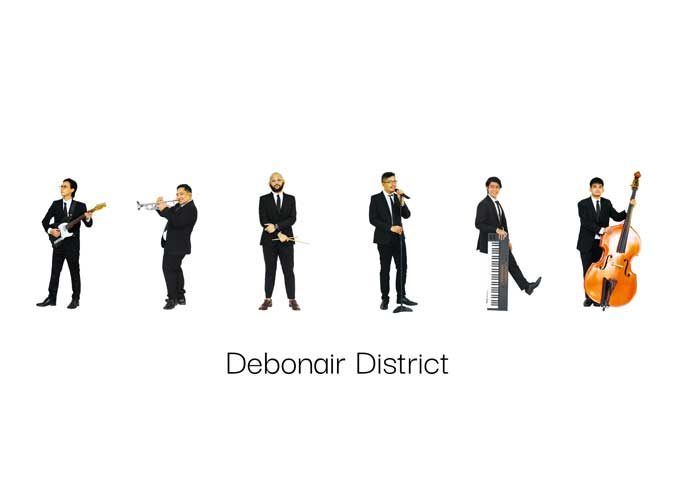 PLAYING music for a live audience, touring and road trips, and rehearsing together are things that have had to take a back seat over the past year and a half. Still, jazz band Debonair District kept busy during the prolonged lockdown by arranging and recording their first EP of Filipino folk songs in jazz arrangements.

Debonair District members first came together as students at the University of the Philippines-Diliman College of Music.

The band’s lead singer, Toma Cayabyab, loved jazz music from an early age, listening to Frank Sinatra and Michael Buble. Since then, Mr. Cayabyab – son of National Music Artist Ryan Cayabyab – was certain he would continue making jazz music. This goal has materialized in Debonair District.

“At the time of the formation of our group, there was this Japanese anime called Sakamichi no Apollo (Children on the slope) and their soundtrack was magnificent. The band setup in the show was also simple: a pianist, a drummer, a double bass player and a trumpeter. When I saw this setup, I thought I could make a similar one,” Mr Cayabyab said. Business world in an email.

“I asked for instrumentalists and my best friend from college put me in touch with Neo, who brought in Joey, then Chico, then Harold…” he said. “Anton came into the picture just two years ago (circa 2019) when we decided to include the sonic textures of electric guitar in our music.”

The group has a repertoire of jazzy Filipino folk songs, kundiman, as well as pop and foreign music. In addition to writing and recording music, the band performs at weddings, corporate events, and private events.

Mr. Cayabyab credits artists such as Bob Aves, Eddie Munji and his father for pioneering the reinvention of Filipino songs in the jazz style.

“I could imagine linking our own style of jazz music to these Filipino songs and it would sound great and unique…” Mr. Cayabyab said. “At Debonair District, we like to find the charm of every Filipino folk song, kundiman, and love songs, and giving them their own jazzy personality. We like to arrange them in the hope of bringing appreciation and love of Filipino music to the younger generation.

Among a wide selection of folk and kundiman songs, the band narrowed it down to five tracks for the EP: The Tagalog Folk Song”Leron Leron Sinta“, Pangasinan’s Love Song”Malinac Lay Labi“(Peaceful Night), the children’s song”Sarapen Pen“, a medley of the Ilocano song”Ti Ayat Ti Maysa Nga Ubing“(A Child’s Love) and the Filipino Folk Song “Sampaguita” and the Ilocano Folk Song”Pamulinawen.“All the songs are part of the band’s regular concert repertoire.

“We are doing our part to continue the lineage of Eddie Munji’s Pinoy Jazz or that of Ryan Cayabyab Roads to the Roots – rearranging Filipino folk songs to fit the typical jazz idiom and instrumentation,” the band’s keyboardist Harold Santos said in the same email, adding that the EP’s music makes “homage to an older style of prefusion jazz”.

During the strict lockdowns, the band members had online chats before finally recording the songs together.

“We needed to learn how to be an online group. That meant bonding through Zoom meetings and chat. More importantly, it also meant being more understanding and caring towards each other since we all had our own problems to face during the pandemic. And I believe that it was thanks to the thoughtfulness and self-sacrifice of my comrades that music and creativity were still possible during the pandemic,” said guitarist Antonio Concepcion.

SONGS
Mr. Cayabyab explained the arrangements made for each song.

For “Leron Leron Sinta,the band invited a friend, Jacques Dufourt, to play percussive instruments on the track for a rhythmic Samba style.

“We quoted a section of the trumpet line and the progression of the ‘Leron Leron Sinta‘ arrangement by Ryan Cayabyab in his album, Roads to the Roots. We also recently decided to add this funky bassline section to the second half of the song for the recording to give it a contrasting personality,” Mr. Cayabyab said.

For “Malinac Lay Labi,The band wanted to retain that ‘peaceful night’ feel to complete the context of the song.

“Instead of a trumpet, a flugelhorn was used to get that sweeter sound, then it’s followed by a bass solo. We’ve added a bonus: a tribute to folk songs by also adding a clink rhythmic feel in the middle,” Mr. Cayabyab said.

The arrangement for “Sarapen Penis inspired by the “cool beach feeling”.

Meanwhile, “Ti Ayat Ti Maysa Nga Ubingand “Sampaguita” were combined into one track due to their similarities in musical and lyrical themes. “The first five notes of the two songs are thematically identical, a flower serves as the essential descriptor,” Mr. Cayabyab said.

“I wanted to paint the music with the message of the song where ‘Pamulinawen‘ is the name of a woman who has a heart of stone, and a man asks her forgiveness for doing something wrong and pleads for reconciliation. I wanted to highlight this conflict,” Mr. Cayabyab said.

“It would be a wonderful achievement if Filipinos appreciate the folk music we have. It would be even better if the whole world could hear how beautiful Filipino folk music is,” Mr. Cayabyab said.