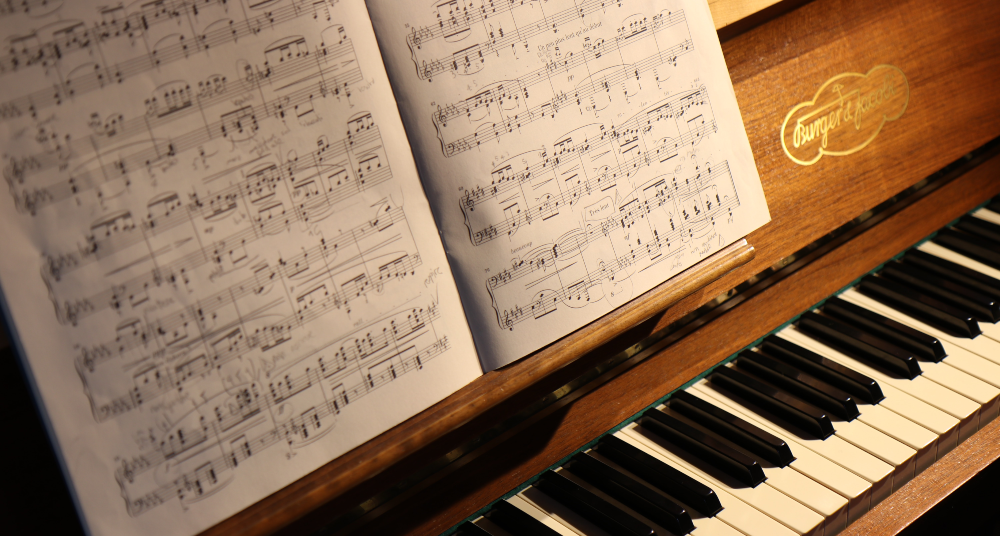 “It behooves us as songwriters to adapt as much as we can.”

This week, a Help Musicians survey of more than 500 professional musicians revealed that 98% of them are worried about their ability to earn a living in the next six months. The cost of living crisis is hitting the industry, with many respondents worrying about paying for energy, food, housing and music equipment. Revenues have also been hit by post-Brexit restrictions on touring and composers’ difficulties accessing work overseas. For many smaller, independent practitioners, touring in the EU is no longer financially viable. Add to that the fact that audiences across the country still haven’t returned to their pre-pandemic numbers, and you begin to paint a full picture of the pressure affecting the industry.

As part of this year’s first Composers’ Week, the Ivors Academy is launching Composers under pressure?, a dialogue and campaign exploring the challenges and opportunities facing composers today. Born from a survey of previous winners and nominees of the Ivors Composer Awards, the campaign aims to build an image of the landscape today, as well as looking to the future.

The president of the Ivors Academy Classical Council, Lloyd Coleman, wishes to point out that the Composers under pressure? campaign is the start of a conversation rather than a dirge. But, like many of their peers in the industry, songwriters are feeling the pressure. In addition to issues affecting the music industry as a whole, 44% of survey respondents Composer under pressure? survey reported a decrease in their number of commissions.

In many cases, commissioning fees are what allow composers to continue doing their work. This means that they can afford to take the time to write the two-hour opera or the half-hour concert for an orchestra. Lloyd notes that this was already a difficult pattern without the added stressors, but it becomes an untenable situation. “The cost of living issue has only exacerbated this for many people,” he says. “You certainly see this trend of more people having to take work from other forces, whether it’s teaching, or working in another organization, or working outside of the arts.”

“The less time you spend being able to compose, the less you are on stage and the less able you are to develop your profile as a composer, to get a work performed and listened to.”

Relying on a portfolio career, while effective and fulfilling for some, can also trigger a vicious cycle. “The less time you spend composing, the less you are on stage and the less able you are to develop your profile as a composer, to get a piece performed and heard,” says Lloyd.

Post-Brexit complications have only increased pressure on artists concerned about their profile abroad, with travel restrictions and visa issues making it difficult to collaborate with EU organizations. Closer to home, however, Lloyd says it’s hard to overstate the impact the pandemic is still having on songwriters’ earnings.

“Many audiences have not returned to concert halls and venues, and they are booking much later. Promoters are very nervous about ticket sales and audience attendance post-pandemic, due to the profound shock this has had on our cultural ecosystem,” he says. “That inevitably trickles down to composers and creators in the future. If we can’t sell so many tickets, we can’t do so many concerts, we can’t commission so many composers, and so on.

“We need this new music so that the UK continues to be seen as a global hub of creativity and incredible music makers and musicians.”

The potential ripple effect on the country’s music landscape is striking. “Without this new music, and without new ideas and new inventions, then the art form is static. It just keeps repeating itself,” Lloyd says. “We need this new music if the UK is to continue to be seen as a global hub of creativity and incredible music makers and musicians. It’s a relationship we’ve had for so long. And that’s something that’s much more in jeopardy right now.

Another worrying factor for the future of music in the UK, particularly in England, is the pressure on publicly funded music education in schools. A good investment in classical music begins long before new composers reach the professional level. Lloyd recalls that at the 20th anniversary celebration of the Ivors Composer Awards this week, composer and orchestrator Charlotte Harding spoke “with passion and flair” about her own music lessons at school. Having been hugely influenced by her music teacher at school and taking saxophone lessons through the public system, Charlotte won an Ivors Composer Award, among other accolades.

His experience closely mirrors Lloyd’s, and protecting this system is something he is passionate about. “I had free music lessons, free clarinet lessons at school. There was a school orchestra, there was a local youth orchestra, there was a county youth orchestra. There was a real sense of progression. This ecosystem has become increasingly fragile and is almost in danger of collapsing. In some parts of the country, the layout is patchy at best,” he says.

“Having access to free music lessons, instruments and well-trained teachers who are passionate about teaching music is a birthright, I believe. It should be seen as a much more central facet of our education system.

Local charities and after-school programs do a good job, but there’s something to be said for families who don’t have to seek out this education. If kids come across music in their daily school life, those who weren’t already interested might find something sparking. It’s hard to pursue something you haven’t been exposed to. “Having access to free music lessons, instruments and well-trained teachers who are passionate about teaching music is a birthright, I believe. It should be seen as a much more central facet of our education system,” says Lloyd.

If there are many stress points for composers in 2022, the Composers under pressure? campaign is also optimistic about the future. Innovations in social media and technology, for example, have given composers more control over how they work in terms of genre and publication. These tools can also increase the reach of composers and help a little to counter the current difficulties of traveling and working abroad. On the equipment side, new developments can allow orchestras to work with non-traditional instruments to create new sounds and sound compositions. “There are opportunities there to advance the art form,” Lloyd says.

Elsewhere, crowdfunding and community funding sources have enabled composers to continue creating new works on their own terms. “The opportunity with technology is the kind of democratization of being able to create music that is truly about you and truly about what you want to do,” says Lloyd.

The Composers under pressure? will spark conversations around the very real challenges facing the classical sector and composers at all levels. But this is by no means a negative campaign. There are reasons to be optimistic. “It’s also incumbent on us as songwriters to adapt as much as possible,” says Lloyd. “And with some of the challenges that arise, I think there are also opportunities to adapt.”

All of this, he says, is just the start of a conversation. But he hopes it’s one that will lead to positive things for songwriters in the future. “I am by nature a little optimistic,” he says.

The 10 Greatest Composers of the 21st Century (To Date)

Singers and songwriters, send in your best ideas for the new school song for Rock Ridge