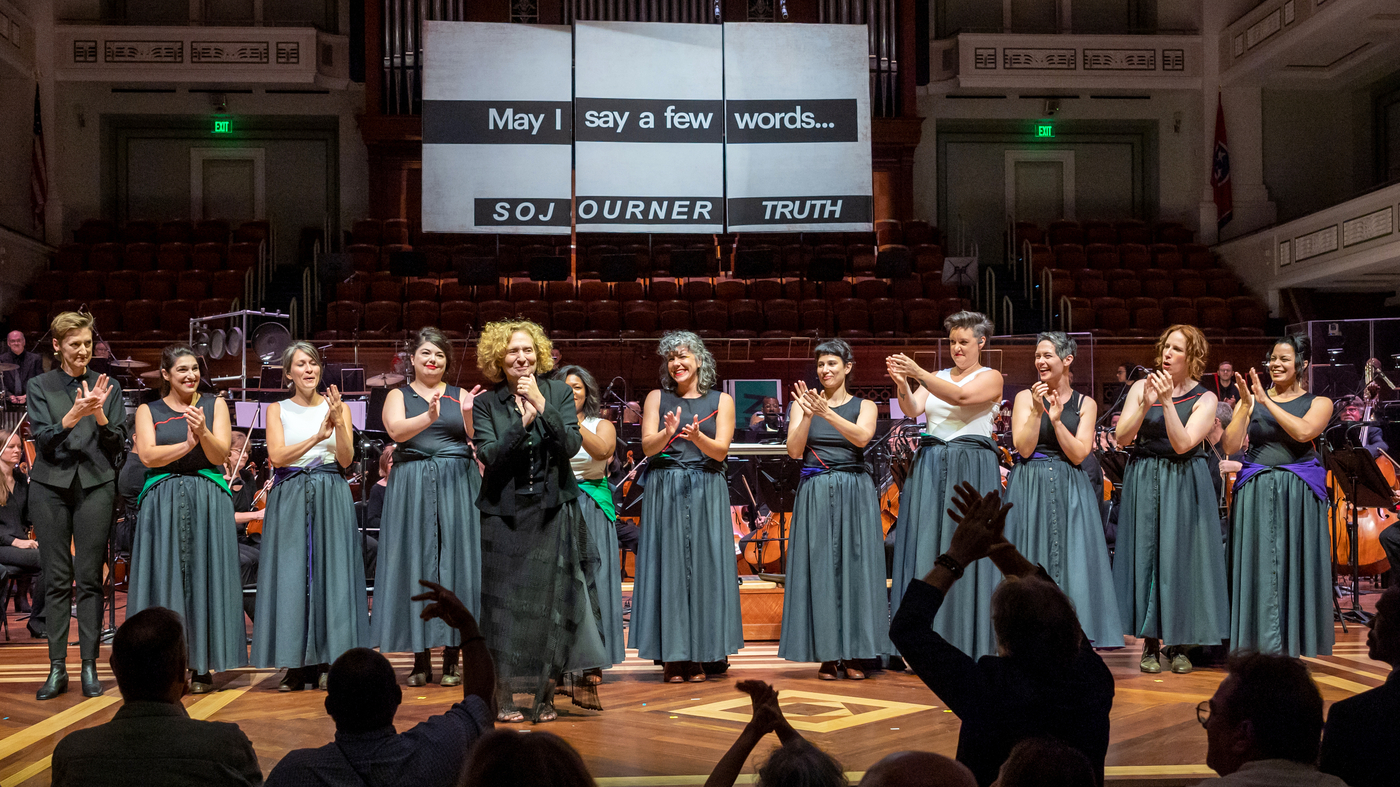 Is the tide finally turning for women composers at the symphony? : Misleading Cadence : NPR

Composer Julia Wolfe at the world premiere of her piece by the Nashville Symphony Orchestra His history September 15, 2022.

Composer Julia Wolfe at the world premiere of her piece by the Nashville Symphony Orchestra His history September 15, 2022.

“Zero is a very damning number.” It was the contrite admission Jeremy Rothman, director of programming for the Philadelphia Orchestra, offered in 2018 when confronted with a stark truth: about the roughly 55 different composers whose work would be performed during regular symphony concerts by its organization during the 2018-19 season. , none was a woman. To be fair, the same was true of the Chicago Symphony Orchestra. The numbers weren’t much better for the New York Philharmonic and the Cleveland Orchestra.

Four years later, there is still work to be done, but the tide seems to be turning. More than one in four composers in Philadelphia’s current season is a woman. Of these, three living women receive world premieres. And there’s a showcase for pioneering early 20th-century black composer Florence Price; the orchestra’s recording of its once-forgotten symphonies already won Philly a Grammy in April.

“Every program we watch is an authentic representation of our community and our world,” Rothman said, reflecting on the current season’s offerings. “And that includes gender, sexual orientation, geography, cultures, religions, backgrounds.”

Indeed, the sound of symphony orchestras seems to be diversifying across the country — even in top organizations that were programming entire seasons without women just a few years ago. The last Orchestra repertoire report, a statistical overview released by the advocacy group the Institute for Composers’ Diversity, shows a 638% increase in music by women in our symphony halls over the past six years. The number of female songwriters of color — which started at next to nothing — has increased by 1425%.

So what happened? Simon Woods, president and CEO of the League of American Orchestras, says that on the one hand, the disruption created by the coronavirus pandemic has led to a widespread reassessment of established cultural institutions. The world of classical music was no exception.

“During the pandemic, we were in this very urgent mode of response to the situation, which was evolving on a month-to-week, sometimes-to-day basis,” Woods said. “But it gave us a kind of gift, which is to say, it gave orchestras the ability to make changes in response to the change in the spirit of the times. … And what orchestras have now done, across the country, is they’ve raised the bar to think differently about who’s included, whose voice is heard, whose music is on every stage.”

Anne Midgette, former classic critic for The Washington Post, adds that the new level of awareness around inequality in classical performance has quickly turned into a demand for greater accountability. “The changes that everyone in the orchestra business said, ‘It will take years,’ suddenly accelerated — by the pandemic, but also by the general social discussion and tenor of the times,” says Midgette. “It became clear that you couldn’t not do this.”

Composer Jessie Montgomery salutes on April 28, 2022, after the world premiere of her piece anthem for all at the Chicago Symphony Orchestra, where she is composer-in-residence.

Composer Jessie Montgomery salutes on April 28, 2022, after the world premiere of her piece anthem for all at the Chicago Symphony Orchestra, where she is composer-in-residence.

Even the composers themselves say they feel a change. “It seems to be changing,” says Jessie Montgomery, whose soulful, dark texture anthem for all received its world premiere in April at the Chicago Symphony Orchestra, conducted by Riccardo Muti. “Orchestras, chamber groups and opera companies are embracing composers they traditionally would not have embraced.”

anthem for all is just one of three major pieces Montgomery has been hired to write as the CSO’s current composer-in-residence. She also organizes their contemporary concert series CSO MusicNow, and was recently appointed Composer of the Year by musical america. “Programming is tough,” admits the 40-year-old New Yorker. “A lot of it is about trying to make sure the audience feels good, and not surprising them with too much new stuff. There’s a lot of that feeling in the presentation world where they’re scared to offend anyone with anything out of the ordinary.”

Yet because orchestras are under increasing scrutiny today, conductors and programmers are paying more attention to issues of diversity and inclusion. This has been the case not only in the biggest institutions, but also in mid-level orchestras like the Nashville Symphony, which last month played the world premiere of Julia Wolfe. His history — a striking hybrid oratorio inspired by the history of women’s rights movements, with lyrics by Sojourner Truth and Abigail Adams. The 63-year-old composer’s music will also be heard in major orchestras in Boston, Chicago and New York this season.

Wolfe says she has regularly battled sexism in her career, but even her experience is better than that of her predecessors, who often faced a complete lack of opportunity. “I could complain about that, but it’s been so much easier for me than, say, the generation before me,” says Wolfe. “I’m thinking of people like Joan Tower, Tania León and Meredith Monk. They really had to pull out the machete and fight their way. Nobody really, really recognized the female composers of this generation.”

The shift to a reexamination of representation is good news for Wolfe, although she adds that symbolism is not the same as equality. “You just want to be a songwriter,” she says. “You don’t want to be a ‘composer.’ You really want to do your art and say what you have to say.”

Midgette similarly cautions against conflating the integrity of institutions with that of art, “because art is doing very well,” she says. “I think the institution of the orchestra needs a big overhaul. I drew a parallel with the restaurant: it’s really like we’re eating in a bunch of 1970s restaurants that didn’t have been renovated.”

The Cleveland Orchestra, notes Midgette, has been slower to reinvent itself: of the 42 different composers they feature this season, only three are women. One of them is Louise Farrenc, the 19th century French composer who has enjoyed some posthumous success in recent times. This season, his music is also on the menu of the Houston Symphony, the Philadelphia Orchestra and the Atlanta Symphony Orchestra.

“Louise Farrenc writes music that sounds like classical music for someone whose vision of classical music is Beethoven and Brahms,” says Midgette. “She fits into this 19th century tonal world, which a lot of people expect from classical music.”

But what people expect from their symphony orchestras, in particular, seems to be changing. And it’s fair to wonder if this trend of hearing more works by women and composers of color will last. “I feel like once you open that door, you can’t close it,” Midgette offers. “Even though for some orchestras it’s symbolic, there’s kind of a fundamental shift that’s happening. And hopefully the future will look a lot more like the Philadelphia Orchestra season this year and a lot less like what we came out of.”

As for Jeremy Rothman, the change in Philadelphia is here to stay: “It’s not temporary or short-lived, but something that’s now embedded in our DNA, in our source code, as an institution that move on,” he said. .

And throughout the larger landscape there is growth Company reality that orchestras, no matter what their curators think, will have to face in the future – that attracting larger, younger and more diverse audiences will almost certainly require offering more than the same old, dead war horses , white, male and Eurocentric at the symphony .

“All classic art forms are going to have to think about how to go out and respond to changing demographics and meeting changing society in new ways,” says Woods. “If you don’t think that, then you’re not paying attention.”

(Audio by Jessie Montgomery anthem for allin the radio version of this story, is provided courtesy of the Chicago Symphony Orchestra and Riccardo Muti Music.)