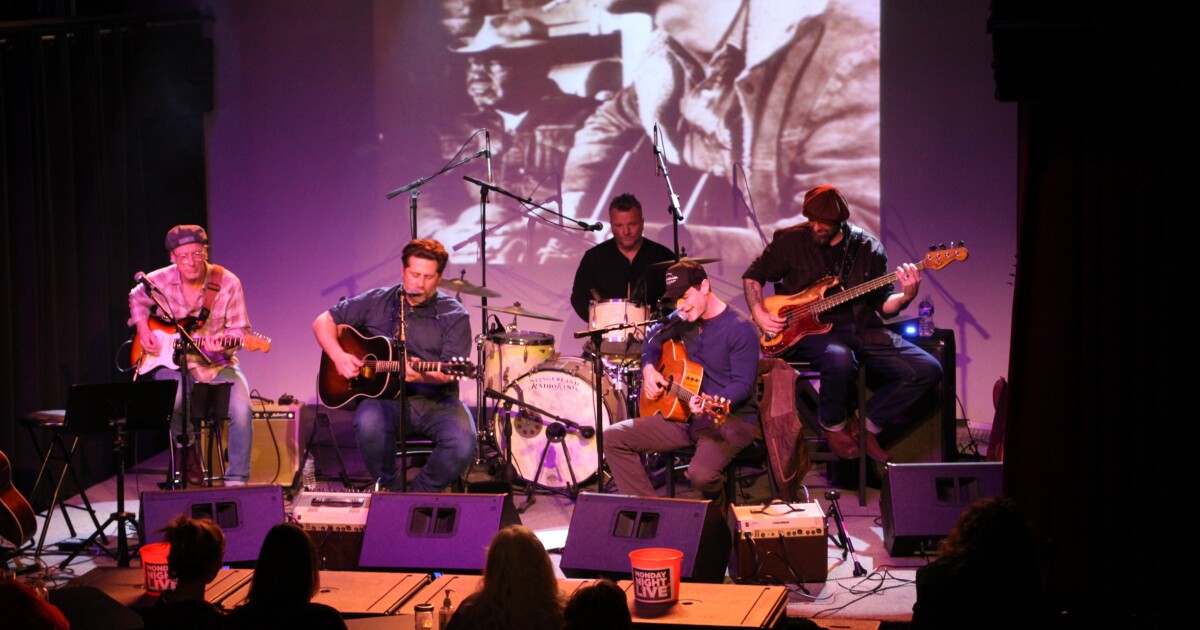 Turn at 24and Street in Des Moines’ Drake neighborhood, and there’s xBk, a nondescript black and gray two-story building tucked between VoteSmart and a pizzeria. Beyond the door, you’ll find a listening room-style room with brick walls, a loft, and a sound system that even the most snobby audiophile should enjoy.

You must visit it on a Monday evening. xBk (@xBKlive on social media) is putting on one of the most musically interesting concert series I’ve attended in Iowa. For J. Jeffery Messerole, who performed with the Monday Night Live! house band earlier this month, it’s one of the most distinctive shows he’s been asked to be a part of.

“I sent them [the house band] a Google Drive folder with all the songs I was going to play. We got together four or five days after that, and they were already on top of rehearsal,” Messerole said. “It’s an incredible feat that they learned my songs in a week, but the week before they had to learn someone else’s songs, then the week after that they learned someone else’s songs. It’s really, really pretty amazing when you think about doing it on a regular, weekly basis, especially because all of these guys are live performers who have their own band.

Cue Scot Sutherland, Russ Tomlinson, and Dave and Anne Ducharme-Jones. Each week, this group of veteran performers and phenomenal players learn 20 original songs from another Iowa singer-songwriter and then perform them live. Before the second set, Anne interviews the guest artist about his music. They call their project Monday Night Live!

Sutherland has hosted the series since its inception, which began as a jazz night at the Greenwood Lounge on Ingersoll in Des Moines five years ago. He is a legendary bassist in her own right and makes a living by touring internationally playing the guitar. As he revives the series after the pandemic, he decided to focus on collaborating with singer-songwriters from Iowa.

“I realize how many amazing singer-songwriters we have in our state, and a lot of them don’t play regularly with their own band,” Sutherland explained.

“It’s different when you hear your music with a band behind you,” added Dave Ducharme-Jones during a pre-show interview in Scot’s living room.

If you don’t play guitar or follow state musicians closely, these names might not mean much to you. Come see them play, or sit back at home on your couch and tune in to the livestream. You will understand my title.

“I’ve been doing this for 10 years now, but I don’t have much experience on high production stages or with performers of this skill level,” Messerole said. “Scot is touring the world, and Dave was also on a label and toured Europe. Russ has played with bands in multiple genres. It was kind of overwhelming to meet these guys and say ‘that’s with it I screwed up.” From the moment we met, they were really respective and that made me feel at ease and made the whole thing a lot more fun.

“Ever since I wrote it, I had a very simple arrangement in mind,” he said. “But when we got together and played, the way they built on top of each other to create a really amazing, cohesive sound that was still stripped down, but full in terms of instrumentation – it really blew my mind. .”

Dave recently spoke about the musical preparation he does. It’s a pretty incredible amount of work to learn 20 original songs every week.

“With the artist we feature, we ask them to provide us with a setlist of what they want to play. If they’re registered, they’ll send us playlists or they’ll demo the songs,” he explained. “So we just take that, the chart as you want it to be, you know, being able to perform the song. I can’t memorize all these songs from week to week. We all have our little cheat sheets – our little roadmap.”

In the end, a lot depends on the artist and their music. Dave and Anne also hold a rehearsal on the Sunday before the show in the recording studio they have set up in their home.

“Last week Jordan came in with some great songs that could be taken in all kinds of different directions, and he let us do what we did,” Dave said. “We did a show a few months ago with Alex Ramsey, and he’s a really interesting artist. His songs aren’t intuitive. And we had to focus and do really detailed notations because you couldn’t get them. They had a little quirk that was interesting. So this set of tracks took a little longer. Most of the artists are really helpful and have chord charts.

These shows are full of the kind of energy you can only find in people who treat their creative collaborators like family and bring an infectious love for their craft to the stage.

“You know, it’s fun for us to meet new artists and play their music,” Anne said. “We’re also really trying to make this a community of music fans, music lovers and people who support local music. It’s been a tough two years for music fans and musicians. It’s time to get together. to assemble.”

There is no cover. The group simply asks you to tip what you can, have a good attitude, and be prepared to “shut up and listen,” in the words of one recent attendee.

If you’re not in Des Moines or don’t feel comfortable going to a crowded venue, Monday Night Live! is offering a live stream of the concert from anywhere for $12. Buy a watch pass through the xBk website.