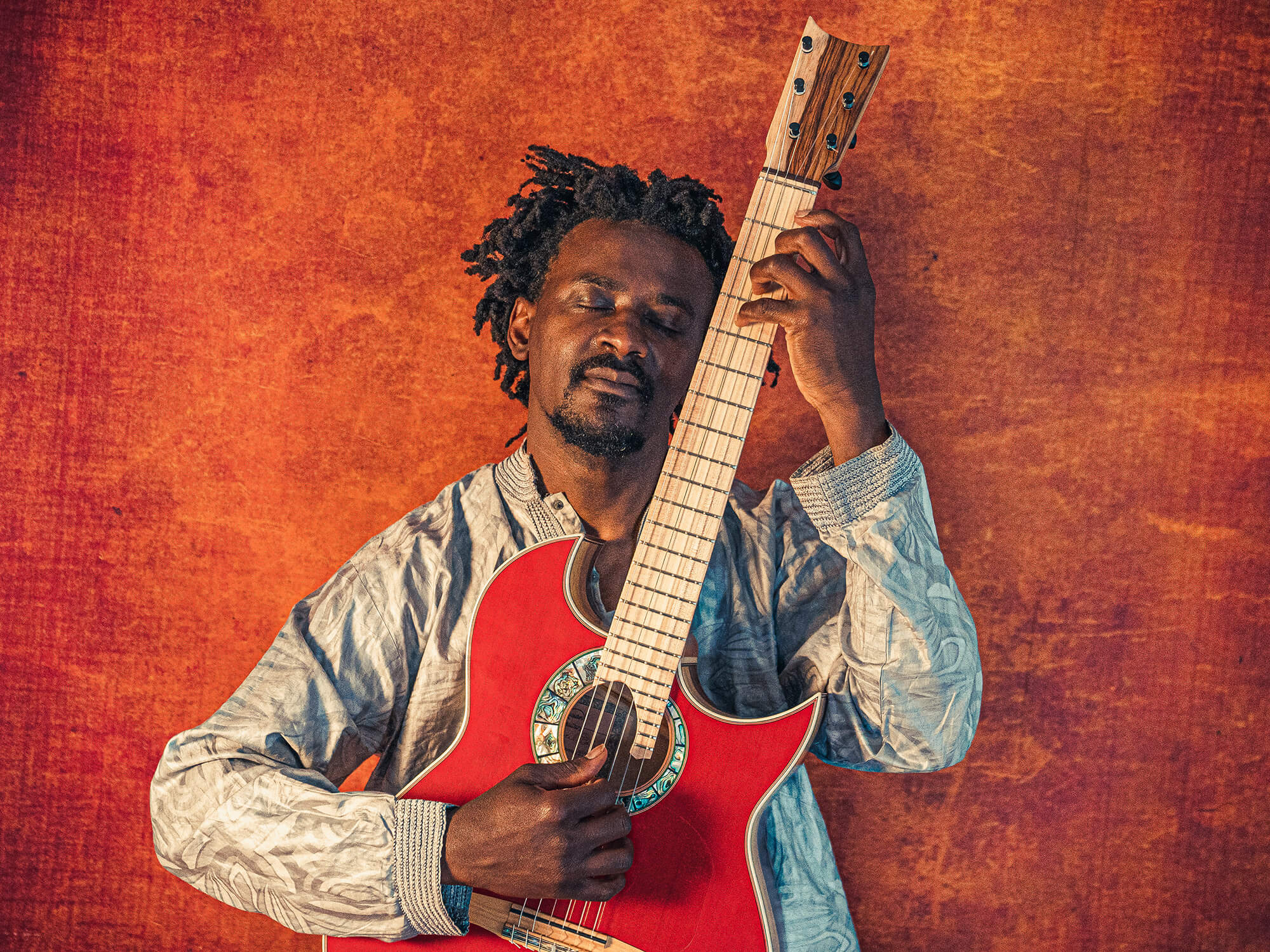 Based in Ireland, Niwel Tsumbu wields an exhilarating guitar style that draws from jazz, classical, rock, folk and rumba. Sometimes Tsumbu’s music is a well of deep emotions, drawing joy and sadness from universal human waters. To others, it’s a high-tech vehicle that sparkles enthusiastically across nations, continents and the cosmos.

Growing up in Kinshasa, Tsumbu was first exposed to traditional Congolese music in church. At the same time, he was absorbing Western classical composers such as Beethoven and Vivaldi on the radio. At the age of 16, he took up the guitar and quickly discovered that he had a prodigious ability to play the traditional styles of soukous and rumba. At 17, his teacher Crispin Ngoy introduced him to jazz.

“I don’t think about styles when I play or listen to music,” Tsumbu says. “All music is just sound. It’s like water for me: the same that falls from the sky becomes the sea, the river that we drink, where we shower, etc. Everything I heard, from traditional Congolese music to classical, jazz, rock, pop, metal, influenced me. I love everything, and it’s all part of my culture as a citizen of the universe.

Against his family’s wishes, in 1997, Tsumbu secretly enrolled in a music school but he didn’t like it and only stayed there for a year. His passion made him walk for hours every day just to listen to music. But at the time, he didn’t own a guitar.

In 2004 Tsumbu moved to Ireland and founded his band in 2007. This 10 piece band started touring the country performing his Big Bang Symphony, and he began an important long-term collaboration with percussionist Eamonn Cagney. The pair released The art of the duo this year a record featuring a number of African musical traditions combined with classical guitar harmonies with a dash of Congolese and East African in the mix too.

As for specific instruments, Tsumbu has a deep love for his Taylor NS32-CE, the oldest of a few guitars he uses, although it is starting to be supplanted by newer instruments.

“I’ve had a deep love for the nylon-string guitar ever since I heard the great Brazilian guitarist Baden Powell on a tape I owned many years ago,” he explains. “Although on this recording I’m using a Spanish guitar, it’s my very last guitar. I’m still not very used to it, but it served very well for recording.

Tsumbu recently started using Instagram to post music content, including guitar tips, and her posts have been met with rave reviews. “It’s growing very fast,” he says. “I get thousands of followers every week. It’s amazing.”

“It turns out the lockdown has been very creative for me on social media as well. Not playing gigs has given me time and space to think more about social media, which I didn’t use much before. I started being active on Instagram and now many of my followers are learning tips I share and sending me clips of them performing. I love seeing them. It’s incredibly rewarding. Some of them contact for private lessons on Zoom! »

Now fresh off performing on Rhiannon Giddens and Francesco Turrisi’s Grammy-winning album They call me home, Tsumbu is set to release a series of new arrangements based on traditional Congolese songs, which he started working on during the pandemic to help keep his mind sharp. The first of them, Kanzenzenzewas released on July 4.

“It’s something I always wanted to do but didn’t have time to do until the whole world came to a standstill in 2020,” he says. “The first, Kanzenzenze, is a very simple children’s melody, usually sung a capella or with a drum. At its core, it is a simple melody singing Africa. I applied a light modern harmony that I have learned in my music making experience so far.

The keystones of Tsumbu’s new arrangements of African folk songs are his sense of rhythm, his virtuoso playing and his thrilling improvisations, which he was able to apply to song due to his unrecognized nature. “No one really knows the origin of Kanzenzenze, he says. “The version I sing is in Tshiluba, one of the many Congolese languages. It is believed to be an ancient song about 10 fingers and 10 toes.

Kanzenzenze evokes the days of youth spent playing with friends and explores how childhood memories can comfort us throughout our adult lives. “It’s a song we used to sing when we were kids while playing a game. You’re sitting close together in a line, pointing your feet, singing, while counting your feet with your fingers. Whatever either the person on whom the last note ends, it is eliminated.

Tsumbu’s version of the song is stripped down, putting vocals and melody front and center. Accompanying its lilting melody is Tsumbu’s intricate nylon-string guitar, which subtly projects the song into shifting harmonic lights. “I could have added a lot of other instruments but I refrained,” says Tsumbu. “Because of the lockdown, I’ve spent most of the last two years playing and singing by myself, so I thought that should reflect in the music.”
Whether playing rumba or jazz, plucked nylon or amplified electric, Tsumbu’s intricate guitar work always invites repeat listening.