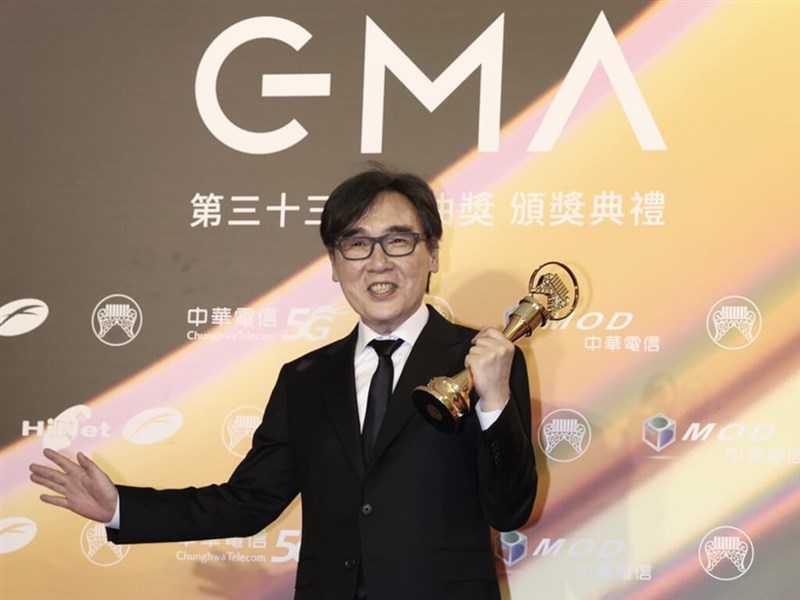 In his acceptance speech, Chen called himself an “extremely lucky” man.

“I think it’s because of fate that I’ve met so many people. I’m able to get this award largely because I was able to enter the music industry at the best time with the best people.”

Chen then thanked everyone he had met during his career – especially singer Jeanette Wang (王芷蕾), who teamed up with Chen in 1985 on his hit song “Taipei Sky” (台北的天空) – as well as musicians and mentors he met along the way.

Wang made a special trip from the United States to present the award to Chen during the ceremony at Kaohsiung Arena.

She said Chen has dedicated her career to Mandarin music and cultivated many new talents, helping to bring diversity to the music industry.

Chen never hesitates to share his vast knowledge with newcomers, and he has an admirable work ethic, she said.

Chen started his singing career in the early 80s in Impression Band (印象合唱團), and later became the general manager of the label Forward Music (豐華唱片).

During her career, Chen has written and produced countless Mandarin songs and helped bring fame to many Mandopop icons, including Mandopop Queen A-mei (張惠妹).

Chiu, who went by the name Chiu Chen (邱晨), was the singer and guitarist of the group Chiu Chiu (丘丘合唱團) and also a mentor for Chin, better known as Wawa (娃娃).

“While he was known to be one of the most recognized performers of Taiwanese folk music, some would also say he was the one who ended the era with the groundbreaking song ‘Tonight (就在今夜) ‘ which topped the charts for a long time,” Chin said.

She said that Chiu’s whole life was devoted to music, creating many songs that touched the hearts of countless people.

“‘Tonight’ I would like to say to my Heavenly Father: Dad, you won,” Chiu An-chen said at the end of her speech.

Chiu began his career in the late 70s as a Mandarin folksong singer, selling his newly composed 15 songs at once in his first foray into the industry.

He then experimented with other influences by forming his pop rock group Chiu Chiu Band in the early 80s.

While the late Chiu made his mark on the Mandarin music scene early in his career, he spent the latter part of his life in his hometown of Taichung, participating in social movements and promoting the dialect, music and culture. of the Hakka people he identified with.

Besides the Golden Melody Award for Special Contribution, Chiu also received posthumous recognition from the Ministry of Culture and the Cabinet-level Hakka Affairs Council.

★ EggPlantEgg wins song of the year