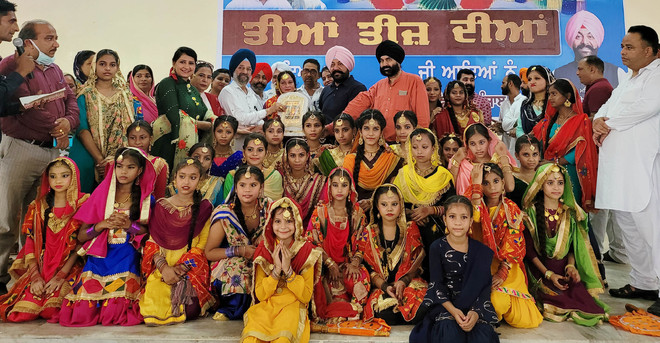 Teeyan Teej Diyan – a festival to celebrate the monsoon season – was celebrated with fervor at the Phillaur Community Center here on Sunday. The program was organized by Sandeep Kaur Dhindsa of Punjabi Sabhyacharak Pid (Phillaur), Punjab. Children, girls and women sang folk songs and played giddha during the program. Former Punjab Youth Congress President and Phillaur Assembly Constituency Leader Vikramjit Singh Chaudhary was the chief guest of the event.

Chaudhary appreciated the efforts of the Punjabi Sabhyacharak Pid to keep the traditional culture of the state alive. He said Punjab has a rich heritage which must be preserved for future generations. He added that the teej festival is also a symbol of women’s empowerment. Highlighting the efforts of the Punjab government for the empowerment of women, he said there was 50% reservation in local bodies, 33% reservation in government jobs, free bus service, doubling of the pension for women aged from Rs 750 to Rs 1,500 and increase in the amount of the Shagun scheme.

At the end of the event, Chaudhary handed out awards to the performers and honored the guests including Prabhnoor Kaur Dhillon who has won several awards in giddha and bhangra including Miss Punjaban and Punjab Di Dhi. —TNS