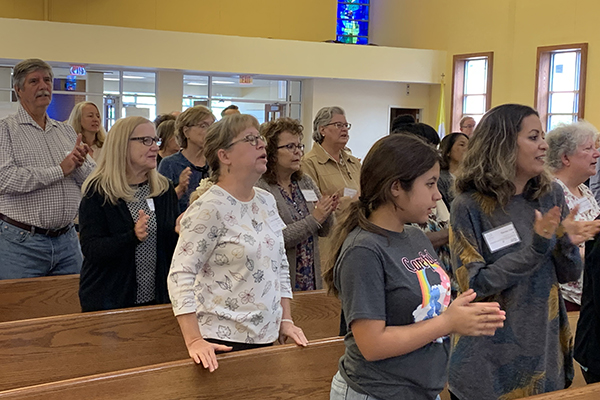 CHERRY HILL – In the presence of the liturgical ministers of the diocese gathered before her, Sarah Hart, renowned musician and singer, spoke of the three keys of Christian evangelization.

“One, be your authentic, true and beautiful self. Second, recognize that it’s not about you and live a life of self-sacrifice for the glory of God. Third, love yourself all the time, asking yourself, “Is this the way to be loving?” Is that the loving thing to say? ‘”

Hart was one of two keynote speakers at the Diocese of Camden Liturgical Ministry Retreat, “Together Renewed”, which saw 120 people – readers, Eucharistic ministers, musicians, ushers, hostesses and hospitality ministers – come together to refresh in spirit. Held September 24 at Christ Our Light Parish, Hart led a conference in English, with well-known singer, songwriter and teacher Iván Diaz leading a retreat in Spanish. The day also included fraternity, prayer, reflection and a closing mass with Father John Picinic, parish priest.

Diaz and Hart kicked off the retreat with a concert the night before, a good way to set the tone for the purpose of the retreat: for lay ministers to step back, refocus and be renewed and reaffirmed in what they do,” said Mike Bedics, diocesan director of the Office of Christian Worship and Initiation.

Indeed, Hart, dressed casually in jeans and a long-sleeved blue shirt, set the tone for the conversation as she sat at the piano and shared her experiences of the pandemic lockdown.

As a touring musician and speaker whose income depends on travel, the lockdowns kept her at home, “and I didn’t know what to do,” she explained.

“I scrubbed and cleaned my house [every day]she said, explaining that she was frustrated with “all this energy and nothing to do. … It’s very easy to focus on what’s been hard and hard to focus on the good.

So for someone used to writing songs in cars and airplanes, she had to refocus on being present in the moment and start writing at home. She traded live gigs for performances on social media, where she “felt the powerful presence of people and community.”

And, instead of being away from family and friends for days and weeks at a time, she “cherished the amazing time with my kids” and the cheese and wine nights with the neighbors, all “able to ‘to be present to each other’.

She asked the audience the questions she had been asking herself during this time. “Who do we love? Why do we do what we do? Where is the joy, and how can we make that joy tangible for the people around us? After all, she says, joy is a witness and guide to God’s peace.

Among those enlivened by the retreat was Michael Elpham, who along with his wife, Marceleena, serve as Eucharistic ministers at Christ Our Light Parish.

Calling Hart’s speech “practical and inspirational,” Elpham said he felt renewed by the retreat and being with other lay ministers. “It’s good to see people you know and to meet so many others involved in the work of the ministry. I feel elated to be a part of this.

Juanes is inducted into the Latin Songwriters Hall of Fame