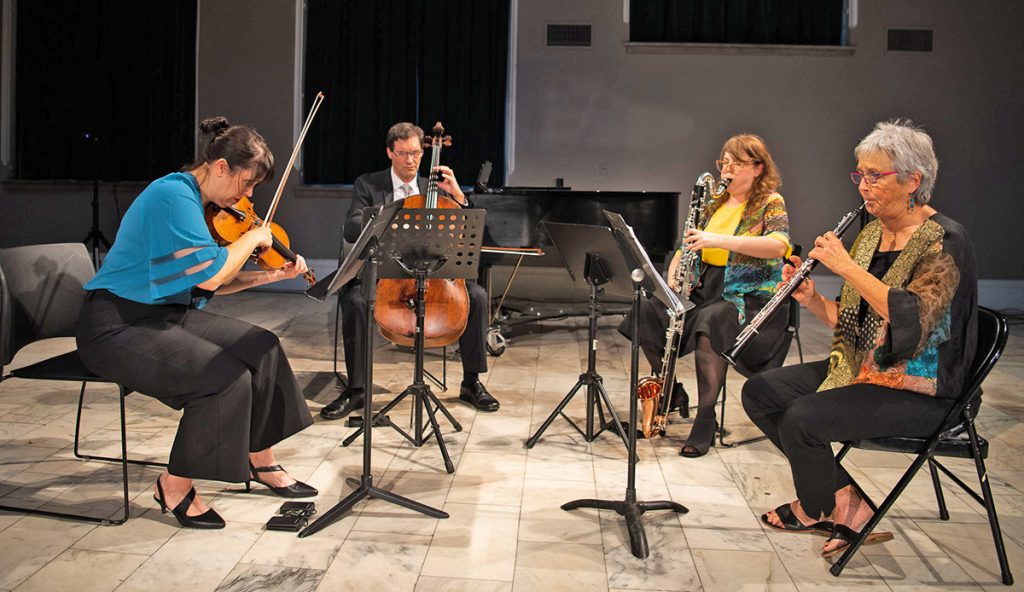 The Whitman sampler that Winsor Music donated to the Cambridge Multicultural Arts Center on Friday gave away some sweet bits. Structured around a theme of composers with mostly strong Boston ties (and a few not so strong), it sought to pack new flavors with old favorites – or at least what the set would like. to be old favorites. Co-artistic director and violinist Gabriela Diaz succinctly said the goal was to focus on the “Boston Six” of the late 19e and early 20e centuries, these being, in alphabetical order, Amy Beach (1867-1944), George Chadwick (1854-1931), Arthur Foote (1853-1937), Edward MacDowell (1860-1908), John Knowles Paine (1839-1909 ), and Horatio Parker (1863-1919). Among these were Beach, Foote, MacDowell and Parker. Into this mix, along with another historic entry in the form of Florence Price (1887-1953), Winsor nestled three premieres, two from local luminaries Eric Chasalow and Yu-Hui Chang, and one from Afghani Milad Yousufi.

Beach and Foote were represented by short duet works, the former’s 1893 Romance for Violin and Piano, Op. 23 and the contemporary “Pastoral” movement of the latter’s Three Pieces for Oboe and Piano, Op. 31. The Romance is a kind of long song without words, created at the Columbian Exposition in Chicago, and shows Beach’s immense gift for flexible melody combined with sometimes bold, but never intrusive, chromaticism in harmony. Diaz and pianist Yoko Hagino projected tender ardour. The Foote, though scored for oboe, is most often heard in its alternate flute score, and we are grateful for its welcome appearance here in its original form, particularly as expounded by the fearsome Peggy Pearson, with Hagino. The comparison of the two versions is instructive: with their distinct timbres, even with all the same notes, they appear as two distinct pieces, the oboe being by far the more pastoral. A revisit of this composition in its entirety would be welcome.

The first of the new pieces was the ghost songs by Chasalow, who, along with Chang, is a mainstay of Brandeis’ compositional faculty. He detailed their somewhat convoluted evolution in their current score for mezzo-soprano, clarinet and piano as recompositions of a set of five for voice and piano, and represents something of a Covid lockdown project. The composer wrote his own lyrics in a burst of inspiration, he says, to express feelings of loss; and, indeed, as the overall title and individual titles (“First Ghost”, “Two Ghosts”, “Ghosts of Key West”) indicate, haunting absence is the dominant motif, though they present themselves as anything but gloomy. In fact, drawing heavily on his work with his wife, Barbara Cassidy, as a pop duo (shades of Bolcom and Morris), in these pieces he embraced a pop, jazz, and in the latest Latin song, sensitivities one rarely encounters in his heavy work in electronics. The first of the songs also features text that is in itself a kind of minimalist piece, with riffs gradually evolving through repeated lines, sung with leaden Broadway-cum-pop elegance by Sonja Tengblad, against a fragmented piano line ( Hagino) for which the clarinet (co-artistic director Rane Moore) contributes, forming with the piano a commentary detached from the vocal line. The second song shades modal folk with Broadway vibes, while the more upbeat finale adds a Latin rhythm spicing up a more standard “classic” idiom (there’s even counterpoint!). It is, overall, a very worthy contribution from Chasalow that should be heard again.

The explanation of the second premiere may have taken longer than the piece itself. As part of its commissioning program, Winsor asks the commissioner to provide, in the season following the “main” work, another short hymn of mine on the themes of peace, love, brotherhood, etc Yousufi, now 27, whose biography and list of commissions/performances/awards would be impressive for someone twice his age, is now a master’s student with Dalit Warshaw in New York (his main connection to Boston appears to be the order he received from Winsor). His entry, Love story, song for the mind is a deceptively simple, almost diatonic piece offset by some clever chromatic shifts in parallel harmony. A true innovation in concert annotation, his short one-page score served as its own program note. After a presentation by the entire Winsor ensemble (Tengblad, Pearson, Moore on bass clarinet, Diaz, Jan Müller-Szeraws on cello and Hagino), the public was invited to participate in the next round. As befits someone (the composer) who, among other things, teaches musical notation using the Sibelius program, the sound of this hymn, to these ears, came with a Sibelian accent.

In his remarks prefacing the beginnings of Resurfacing, Chang also invoked the pandemic lockdown as an overview of her genesis, in which she questioned the meaning of “normal” (who was that who wrote “‘Normal’ is what other people are, and you you’re not”?). Written for oboe, bass clarinet, violin and cello (Pearson, Moore, Diaz and Müller-Szeraws), the instruments mostly punctuate ostinati or other characteristic motifs, and as the work unfolds, they struggle and finally manage, temporarily, to obtain a kind of collective regularity, which dissolves in part but not in part. Life is a bit like that. The ending is quite beautiful, with a charming and not at all “normal” chord progression. In sound and structure Resurfacing is quite different from what we’ve experienced so far from Chang’s style (full disclosure: Chang was co-artistic director of Dinosaur Annex during our long association with that band); then we asked her if this was her “new normal”, and she hesitated, but frankly, we would like to know more.

Once upon a time, “To a Wild Rose” by MacDowell, the first of his ten Sketch of the woods for piano (1896), occupies first place on the charts of the most popular music in America. Based on a tune taken from a Wisconsin offshoot of New England’s Native American tribes, it was as well-known and ubiquitous as Mendelssohn’s “Spring Song,” though we don’t know if it ever scored a Loony Tunes. MacDowell’s tuning insinuates advanced harmony into the simple tune but does not overpower it. Much anthologized and now probably mostly limited to student performance, Hagino gave a straightforward reading that seemed to add nothing to our understanding.

Despite Diaz’s gambling attempt to shoe Florence Price into the Boston Six as a seventh member (she studied at the NEC with Chadwick but made her career mostly in Chicago), there are other songwriters who were more closely associated. , for example Frederick Converse. Nonetheless, from an aesthetic point of view, Price, whose vast majority of his work is only now being rediscovered and which has a definite moment, can rightly be considered the culmination of the most late romantic American style. closely associated with Our Fair City. The seven-song set sung by Tengblad and accompanied by Hagino covered an interesting range of lyrics and underscored Price’s variety of moods, especially in the “middle”.Four more songs” who played his humorous vein; Price had a thing for Ogden Nash, it seems. Price’s sets of African-American poets, with “The Sum” by Paul Lawrence Dunbar, “Bewilderment” by Langston Hughes and Joseph Seamon Cotter, Jr.“An April Song” comes from its more typical vein. There, the gravity and cadences of the Black experience came through, seasoned with harmonies from the world of Chadwick and MacDowell (considered very obsolete in the 1930s when these pieces were written). Tengblad returned to the art song vocal style with impeccable richness and smoothness and precise vibrato control. Except in the “funny” songs, however, her expressive voice and face were not reflected in her hands and body, the employment of which would likely have enhanced the overall effect.

The concert ended with another one-movement excerpt from a longer work, Parker’s Suite for Piano Trio in A major, Op. 35 (1904). Take a moment to shed a tear for Parker, once hailed as America’s finest composer, and whose opera mona ran at the Met; he is now remembered, if at all, as the teacher whom his pupil Charles Ives damned with faint praise (“a fine technician”), and whose meticulously crafted stentorios evoke Mark Twain’s remark that Wagner’s music was “better than it sounds”. When he wasn’t taking himself seriously, Parker could create sparkling, delightful and evocative pieces like his music for opera. Fairyland and this trio, where he takes harmonic liberties somewhat reminiscent of what his vexatious pupil was doing half a decade earlier. Diaz, Müller-Szeraws and Hagino made the playful and melodically engaging finale of the After with an impetus that demands to flesh out the complete work; Mistral, another local ensemble, did it.

Vance R. Koven studied music at Queens College and the New England Conservatory, and law at Harvard. A practicing composer and lawyer, he served for many years as President of the Dinosaur Annex Music Ensemble.