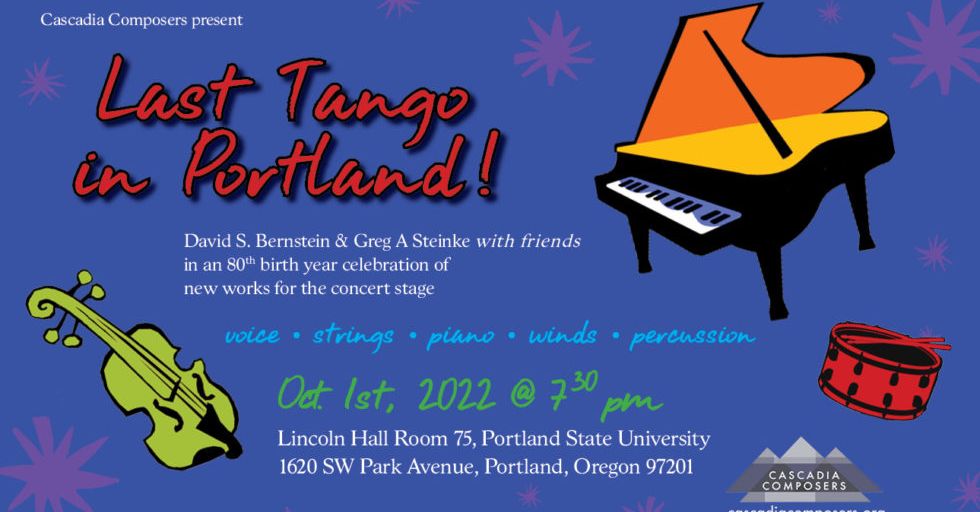 The creative juices are still flowing for David S. Bernstein and Greg A. Steinke. The two composers celebrated their 80th birthdaye years of birth with a concert devoted to their music, including previously unreleased pieces. Under the nickname “Last Tango in Portland”, the festive event, presented by Cascadia Composerstook place on October 1 at Lincoln Recital Hall, with a program that highlighted the substantial talents of both composers.

Bernstein and Steinke are former music teachers with distinguished songwriting careers. To further the efforts of Pacific Northwest composers, they founded Cascadia Composers, part of the National Association of Composers USA (NACUSA). Under their leadership, Cascadia Composers now has over a hundred members, some of whom live outside the Pacific Northwest, and CC has become the largest and most active NACUSA chapter.

The flow of the anniversary concert oscillated between pieces by Bernstein and Steinke. In general, the music gradually moved from complex and denser works to lighter ones.

Steinke’s Suspended (from Image Music XXVII A) opened the concert with varied wanderings of English horn and strings. The music, inspired by a poem of the same name by K’os Naahaabii (aka Don Jordan) expressed a cataclysmic event like a forest fire that spits ash before dying out. Catherine Lee, cor anglais, violins Casey Bozell and Danielle Bristow, viola Dana Rokosny and Diane Chaplin, cello, created the evocative soundscape.

by Bernstein Two preludes to the definition imbued the room with an intricate collage of sounds from two Steinways that were incisively played by Colleen Adent and Sequoia. The two pianists’ explosive outbursts dissolved into lyrical passages and a brief section that created a mysterious atmosphere before erupting into a dense and chaotic finale. It was remarkable that the two pianists achieved a sort of hypnotic mind-meld that kept their sound in tremendous balance.

Baritone Andrew White and pianist Adent created a demonstrative show Civil war, in which Steinke set Carol Coffee Reposa’s poem of the same name to music. A shivering, explosive opening from Adent and a stentorian delivery from White nailed the text’s imagery, which tied the Civil War battle of Vicksburg with more current unrest “from Ferguson to Watts.” The repeating “knocks” at the end of the piece resonated dramatically with White pushing out his voice in a scream.

A propulsive dissonance filled Bernstein’s sound room playonthree. Performed by violinist Bozell, violist Rokosny and cellist Chaplin, the piece gave every player a chance to be in the spotlight. Chaplin excelled with an expressive technique that included some lively pizzicatos. The trio skillfully contrasted the edgy passages and the relaxed passages as well as the rhythmically firm sections and a fiery finale.

Based on Breakdown of logs poems by Austin Kleon, by Steinke Random Blackouts III (of Image Music XL) received its world premiere, with White accompanied by Amelia Lukas (alternating between flute, alto flute and piccolo) and Alexander Dyer and Ian Charlton (commanding a variety of percussion instruments). All six poems conveyed a bit of humor, and “Ladies’ Man” in particular veered deliciously into the realm of lounge music.

The only solo piece on the program was Four silhouettes for solo oboe, by Bernstein. Deftly interpreted by Lee, it expressed four distinct moods. “Impetuous” jumped impulsively. “Pensive” had an angry legato. “Introspective” was marked by well-placed pauses, and “Quizzical” exhibited a chattering, scrambling quality.

The concert ended with the world premiere of Bernstein Sequel to Earth. Amelia Lukas (flute, alto flute, piccolo) Dyer (various percussion) and Sequoia (piano) evoked sounds of thunder, waterfalls, singing flowers and wind. It was an impressive musical concoction with light, fast drums and a bird-like piccolo flute in the second movement and a smooth combination of flute and xylophone in the third movement that especially caught this reviewer’s attention.

A bird brings Vietnamese folk songs to the world