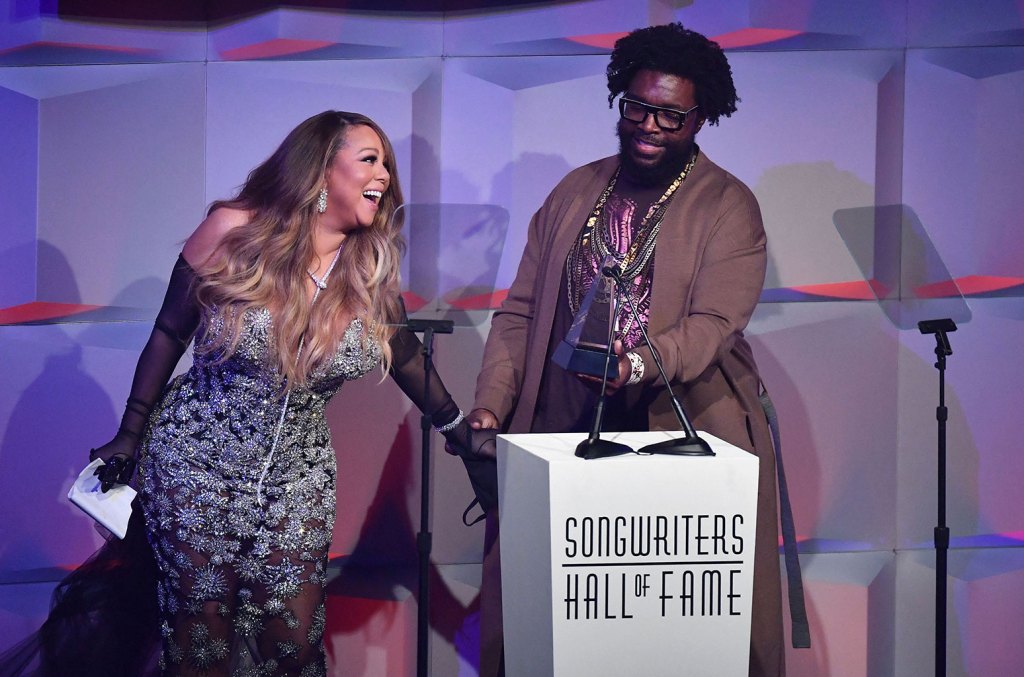 From surprise guests (musical and less than) to jaw-dropping live performances, these are the standout moments of the Songwriters Hall of Fame (SHOF) induction ceremony.

Accepting the Hal David Starlight Award, which honors “gifted songwriters who are at the peak of their careers,” Lil Nas X offered some off-the-cuff remarks about his success and ambitions.

“I didn’t write a speech. This award means a lot to me for the simple fact that somehow I keep doing things and it keeps working,” he noted to laughter and applause. “Thank you, universe. I have no children in the audience, nor a wife, nor in my case a husband to say thank you to, but thank you to my imaginary husband and my children. Before leaving, the top of the Hot 100 made their intentions regarding SHOF clear: “I hope to be back. I will, I will, in 40, 30 years. Much love to you guys.”

During her induction, Mariah Carey played the role of the diva, joking about her lighting and pretending to be offended that her collaborator Jermaine Dupri entered SHOF before her. And ironic or not, she also casually mentioned “the lawsuits” that can make the profession a drag. Coincidentally, someone filed a copyright infringement suit against her this month – over a song released 28 years ago, “All I Want for Christmas Is You”.

Before ripping through a cover of “Sweet Dreams (Are Made of This)” that was somehow cold but heartfelt, St. Vincent hailed Annie Lennox and Dave Stewart of Eurythmics as “scary, sexy, smart, and insanely cool.” Annie Clark recalled a formative early memory of “watching MTV and suddenly a beautiful androgynous creature with orange hair appeared – dressed in a suit and tie, looking like a posh dictator – while a man with eyes bandaged with an ominous headdress was playing a synth line on a computer keyboard.Shortly after its introduction, Lennox (wearing camouflage) and Stewart (enthusiastic strumming an acoustic guitar) performed their classic “Here Comes the Rain Again”. , demonstrating, among other things, the surprisingly moving range that Lennox’s voice still possesses.

Paul Williams, a 2001 inductee who received the “gold standard” Johnny Mercer Award at that ceremony, had tears in his eyes at various points during his speech, talking about his 32-year sobriety and his hope that one day someone will write a song worthy comedian-turned-war-hero President Zelenskyy. And while everyone from Ingrid Michaelson and Rita Wilson sang her praises, the biggest surprise guest had other inductees green with envy: Kermit the Frog appeared via video to salute Williams for “saying in words and music the desire that each of us feels inside.”

Revenge of the NERD

After thoughtful speeches from inductees Chad Hugo and Pharrell Williams, who changed the course of America’s top 40 music at the turn of the century as the Neptunes, the talented Jon Batiste took the stage to perform a medley of the duo’s hits. The big surprise was when Usher joined us for a smooth and sultry reading of Pharrell’s falsetto-filled “Frontin'”, with Ush doing the honors of rapping Jay-Z’s verse.

Another surprise appearance came from Bryan Cranston, who shared that his whistle on Malcolm in the middle leads to an unlikely membership in ASCAP. Cranston’s musical good faith aside, the famed actor said he had “instant camaraderie, music without the music” when he met Steve Miller backstage at a Broadway show. When Cranston thought no one knew what a line like “pompatus of love” meant in the Steve Miller Band’s Hot 100 topper “The Joker,” Miller provided some oblique light on the famously obtuse lyrics. “’Pompatus of love?’ My lawyer is here tonight and he’ll explain what it is and how much it costs when you say so,” Miller said of the line, which some have traced to a 1954 song by doo-wop band The Medallions. .

Scream, let it all out

The Isley Brothers, who were writing songs before many of the ceremony attendees were even born, absolutely tore it up with a career-spanning medley of hits. Ernie Isley also shared that the first time he heard Notorious BIG’s “Big Poppa,” which samples the band’s 1983 jam “Between the Sheets,” he burst out laughing and predicted it would be a bigger hit. success than the sampled piece. He was right, but with no hard feelings — he thanked the late icon and even rapped a bit of Biggie’s verse while performing Isley’s original.

Withstanding some technical issues beyond his control, Rick Nowels performed a rousing mix of hits he wrote or co-wrote, including iconic tracks like Dido’s “White Flag”, Lykke Li’s “I Follow Rivers” and “Heaven Is a Place on Earth” by Belinda Carlisle. .” His introduction came from journalist Ronan Farrow, who casually mentioned that he had shared music demos with Kwismas at one point and received feedback. Is there an imminent musical career for Ronan Farrow? Looks like we need a Ronan Farrow-type investigative reporter to get to the bottom of this.

Dance in our places

Smokey Robinson, 1990 SHOF inductee and 2005 Johnny Mercer Award winner, introduced Motown veteran William “Mickey” Stevenson, calling the songwriter/A&R man his “brother-in-law” and noting that the induction was “long overdue”. In his speech, Stevenson admitted that he came to Motown founder Berry Gordy decades ago hoping to land a gig as a singer, but Gordy flatly told him, “the songs are great but the voice is crap”. Stevenson said he stormed out, returned to the office, and took a job at Motown for “five bucks a day and all the chili you can eat,” which led him to write classics of all times such as “Dancing In the Street”. “It Takes Two” and “Devil in a Blue Dress”. And hey, at the SHOF gala, he even got to sing in front of an enthusiastic audience. It wasn’t quite dancing in the streets, but dancing on the seats isn’t bad either.