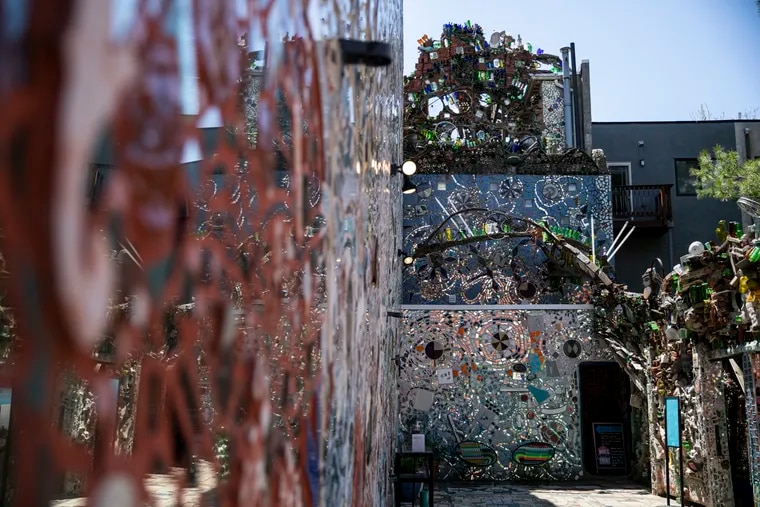 What does Philadelphia look like? Here is what four composers have proposed.

Start on the path of mirrored glass shards and tile mosaics and turn right at the bicycle wheel.

Art is the center of the real worldreads a message on the floor.

On and on, past seashells, ceramic plates and broken bottles, a startling array of shipwrecks and jetsams of life guide you through the Magic Gardens, the popular and fantastical South Street art installation created by Isaiah Zagar.

It’s full of eyes. But what would all this visual stimulation look like translated into rhythm, melody and harmony?

Augusta Read Thomas decided to find out. The Chicago-based composer Magical gardens will premiere Sunday at the Perelman Theater by the Rolston String Quartet in a concert (delayed due to pandemic) celebrating the 200th anniversary of the Philadelphia Music Fund Society.

“It’s an absolute Philadelphia treasure,” says Thomas of Zagar’s creation. When she looks at it, it looks like “a lot of little notes that fit together in a contrapuntal way. So musically, it speaks to me.

Somewhere beneath the sirens and belches of Philadelphia’s garbage trucks, the chirping of birds and the hooves of horses pounding the Belgian block, the city has another soundtrack – something deeper that expresses its identity. Thomas and three other composers listened to it, and the resulting musical scores, unveiled Sunday, capture aspects of the urban experience that could be found nowhere else but in Philadelphia.

Composer Stephen Jaffe was inspired by bells – not the most famous in town, but Toshiko Takaezu’s bell sculpture at the Schuylkill near the Philadelphia Museum of Art and Reginald Beauchamp Whispering bells sculpture outside the African American Museum at Seventh and Arch streets. three bows will be performed by the Network for New Music Ensemble and the Pennsylvania Girlchoir.

Roberto Sierra saw the “ephemeral images” and vivid colors of graffiti as a work for four saxophonists in Graffiti IIperformed by the PRISM Quartet.

In the fields by Tania Leon — winner of the 2021 Pulitzer Prize for Music — won’t be ready in time for Sunday’s concert. A song cycle inspired by Carlos Pintado after the Cuban-American writer strolled through Philadelphia, his work is now set to premiere by the Curtis Institute of Music’s 20/21 Ensemble next season.

“Choosing the composers was a big deal and a rigorous process,” says Musical Fund Society president Linda Reichert. The society asked 11 nominators to suggest eight to 10 composers representing a variety of styles. Each of the 104 recommended composers was then asked to submit two examples of work to be screened for craftsmanship, style and a “very strong compositional voice”, Reichert said.

Forty-eight submissions were received, and a panel of Philadelphia-area composers and musicians reviewed the scores without knowing the names of the composers and narrowed them down to four. Composers were asked to write new works that would reflect some sort of Philadelphia theme.

Bringing new works to the public is what the Musical Fund Society has done since its inception. Founded in 1820, the group was a major music broadcaster in Philadelphia, hosting performances at the Musical Fund Hall by touring artists – Charles Dickens, pianist Louis Moreau Gottschalk and “Swedish nightingale” Jenny Lind, among them.

After a period of decline, the venue on Locust Street near Eighth was sold in 1980 to developers by the Philadelphia Redevelopment Authority for $25,000 and converted to condominiums. The building retains its historic (but not original) facade. Today, the Musical Fund Society supports musicians and the music scene through its grants and awards.

No Philadelphia composer ended up being chosen for the society’s bicentennial commissions, although Thomas had a significant connection to the city in his past. Her husband, composer Bernard Rands, was composer-in-residence for the Philadelphia Orchestra in the 1990s. She later held the same position with the Chicago Symphony Orchestra.

“We had an apartment for seven or eight years in the Academy house. We used to live there but I commuted to Eastman,” she said, referring to the respected music school in Rochester, NY.

Zagar had a presence in Philadelphia then – he was one of the pioneers of the South Street revival of the 1960s – and his work was all over the city. Thomas remembers seeing it back in Philadelphia and was recently inspired by Magic Gardens online. virtual tour.

The first movement of Thomas’ work is called ‘Scherzo’ and uses a theme like a mosaic, with instruments responding to each other, and the theme going through a series of variations. “The variations are very imaginative. They’re short, but you never really know what I’m going to do next, and it’s just like the magic gardens, because you turn around the corner and you don’t know what you’re going to see,” said Thomas.

“Ceremonial”, the second movement, has a spiritual feel, and Thomas embeds the movement with ornamentation, “almost as if you were trying to capture the full vibe of someone who spends their life creating this work and many others works that Mr. Zagar has done around Philadelphia and the world.

Thomas says the Magical Gardens appealed to her with its “intricacy and whimsy and the kind of handcrafted, every-little-piece-assembled-perfectly-with-the-artist’s-hands [aspect]and the plethora of different types of things floating around.

The place has color, flair, whimsy and even humor, she says.

“And yet it’s also a very serious place, the Magic Gardens, in the sense that it’s an epic, massive work of art.”

Three of the Musical Fund Society’s four bicentennial commissions will be presented Sunday at 3 p.m. at the Perelman Theater, Broad and Spruce streets. Tickets are $30. pcmsconcerts.org215-569-8080.