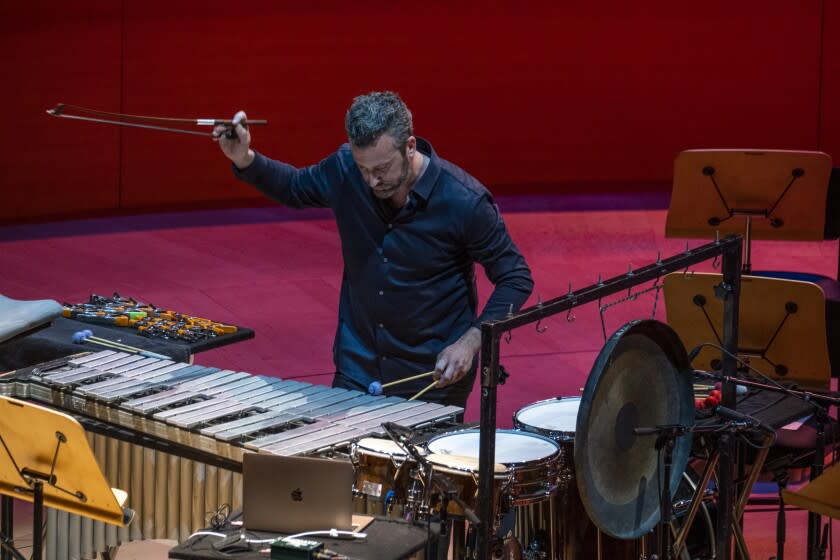 The world has lost 6 revolutionary composers in one year. How LA, and only LA, honors

When Harrison Birtwistle died Monday at 87, he became the sixth pioneering composer to rise to prominence in the 1960s that we’ve lost in less than nine months. This uncompromising British modernist, together with the most important composer of the Netherlands, Louis Andriessen, and the Americans Frederic Rzewski, George Crumb, Alvin Lucier and William Kraft, helped to create revolutionary ways of making, performing, distributing and consider the music.

They are far from the last of their generation of rebels after the Second World War. In America, we still have Terry Riley, Philip Glass, Steve Reich, Joan Tower, Wadada Leo Smith, Morton Subotnick, William Bolcom, Adolphus Hailstork, La Monte Young and many others – all in their eighties and indispensable.

Even so, the consequence of the current loss is huge and difficult to deal with as little of their music is part of the regular performing, recording or broadcast feed, with the exception of Birtwistle in Britain. . Apart from local memorials, there has also been no widespread recognition of their importance, let alone homage to their importance. The exception is LA

Here we had an illuminating attention that culminated on Tuesday with Los Angeles Philharmonic Principal Timpanist Joseph Pereira’s splendid performance of Kraft’s solo percussion piece “Encounters I: Soliloquy” at the Walt Disney Concert Hall. . “Encounters” was added to the Green Umbrella concert by the Kraft-founded LA Phil New Music Group.

Three days earlier, across the street from Colburn School, Piano Spheres, with the services of 18 pianists, staged a six-hour appreciation of Rzewski, a spectacular composer, pianist and improviser who revolutionized practice contemporary with the piano. A week before that, the LA Phil’s “Noon to Midnight” new music festival at Disney included a mesmerizing set of the first volume of Crumb’s celestial “Makrokosmos” series played by pianist Nic Gerpe, as well as a superb performance of Andriessen’s “De Staat”, a majestically aggressive orchestral scream to the place of music in a society ardently directed by John Adams.

Last month, the Monday Evening Concerts accompanied Lucier in an evening in memory of a composer who sought sound and meaning within everyday life. He turned to tables, chairs, teapots and the innards of a piano to unlock acoustic secrets. Even more surprisingly, it turned inside its brain to share the sound of its waves, which can do a thing or two to a listener’s brain.

Putting it all together is a brain drain in itself.

The Green Umbrella memoriam to kraft reminded us that he was not only a wonderful composer, whose music is rarely heard, but also the most important member of his generation to follow John Cage’s edict: “Percussion is a revolution!” Kraft’s hard-hitting revolution was surprisingly widespread. As principal percussionist and legendary timpanist of LA Phil, he championed new music and had an outsized influence on the importance of the modern orchestra, reminding us that all great music is the product of its time and its place.

Kraft’s “Contextures: Riots – Decade ’60”, written for the LA Phil in 1967 and reflecting Watts’ uprising two years earlier, began the orchestra’s goal of acting as an agent of social activism , for which the LA Phil is now a famous international leader. The piece also follows the noble example of Beethoven.

There’s no better example of the kind of resonance that Kraft’s drum promotion (now a given in modern music) has had than Ellen Reid’s “Fear l Release” for four drums placed around the room for Tuesday’s schedule. Reid, who has become one of the leading voices of his millennial generation, co-curated the program with violinist Pekka Kuusisto, who opened it with a stunning premiere of Reid’s “Desiderium” for solo violin. .

Like Kraft, Rzewski insisted on political necessity. The piano was a revolution. His most famous piece, an hour-long series of variations on “The united people Will never be defeated!” used compositional and keyboard techniques from Bach to the present day to create such excitement that few contemporary music has.

The Piano Spheres occasion was a sad, but catchy appreciation of Rzewski. The series had invited the composer to perform and arranged for him to commission a new piece, which he completed shortly before he died suddenly of heart failure in June. The first part featured a varied collection of 14 works by Rzewski played by mostly young pianists in Colburn’s courtyard, which was transformed into a beer garden on a cool, windy afternoon. Among the performances I’ve heard are Daniel Newman-Lessler’s lush theatrics in “Rubinstein in Berlin,” in which the performer recounts a shocking incident from Arthur Rubinstein’s memoir while illustrating it at the piano, and the exploration by Andreas Foivos Apostolou of the disturbed interiority of a nocturne by Rzewski. .

In addition to creating the pleasantly quirky new suite (conventionally for Rzewski, and unconventionally for everyone) in four movements, each played by a different pianist from Piano Spheres (Vicki Ray, Gerpe, Aron Kallay and Gloria Cheng), two pianists guests were on hand with works written for them in 2020. Rzewski cultivated a reputation as a curmudgeon, but as Lisa Moore showed in “Amoramaro” and Ursula Oppens in “Friendship,” the composer lovingly captured the passion in the first and deep strength and musicality in the last. A long-time champion of Rzewski, Oppens made the first classic recording of “People United”.

“I don’t think there’s a serious pianist who hasn’t played Rzewski,” Moore told the audience, describing his dedication to the composer. As a former Bang on a Can All-Stars pianist, she was also well qualified to talk about Andriessen’s impact on contemporary music. The iconoclastic Dutch composer, who proudly chose to work outside of mainstream musical institutions (and who was friends with Rzewski), proved an inimitable musical and entrepreneurial influence on Bang on a Can founders David Lang, Julia Wolfe and Michael Gordon. You need look no further for that than in the lustrous, spiny instrumental sound of Lang’s arrangement of Meredith Monk’s “Double Fiesta” at Tuesday’s Green Umbrella.

Like Andriessen, Crumb, too, had an unflinching hold on young composers. Gerpe’s magical “Makrokosmos” was a repeat of the Crumb tribute he staged in March at Monk Space. In this, a dozen composers have contributed new pieces for solo piano to play alongside Crumb’s dozen or so zodiac-inspired “fantasy pieces”.

Lucier has become a pole of attraction for the hippest young composers interested in the interiority of sound. Hildur Guðnadóttir included Lucier’s triangular solo, “Silver Streetcar for the Orchestra”, in his LA Phil film music program 12 days before the 90-year-old composer died in December. “Silver Tramway” also performed at the Monday Night Concert Tribute to a packed house at 2220 Arts + Archives in Historic Los Angeles.

The main room was the first on the west coast of “Palimpsest”. Written in 2014, it featured soprano Joan La Barbara (for whom it was written) reading an anecdote over and over as it was slowly distorted by electronic commentary. At first you think, “That’s enough, this can’t go on.” But if you know that Lucier is celebrated “I’m sitting in a room” you know it will continue – and I hope you will too. You do. It begins a journey in which sound distortion leads first to perceptual distortion and then, after about an hour, to mental clarity.

But who is crazy about Harry? This is how Birtwistle was affectionately known in Britain, though the affection did not always extend much further to a general audience who often found his scores inscrutable. His thorny operas, his greatest works, are weighty but worth it in their translation of harsh reality into primordial mythical import.

Tributes in Britain are expected to pour in. America, on the other hand, has shown little appetite for Twig despite some strong supporters. The late patron of Los Angeles Betty Freeman called him the greatest composer of the 20th century and commissioned “The Last Supper”, Birtwistle’s last opera, which had its premiere in Berlin in 2000. Christopher Koelsch, the director of the Los Angeles Opera, has expressed immense admiration for Birtwistle. But don’t expect to see “The Last Supper” here or any Birtwistle opera in America anytime soon. They’re expensive and difficult to produce, and they’re not really good at the box office. Freeman, who died in 2009, is no longer there to foot the bill.

She commissioned Birtwistle’s fierce yet sonorous piano concerto “Antiphonies” for the LA Phil. The stellar 1996 premiere, conducted by Pierre Boulez and featuring Mitsuko Uchida as a soloist, was coldly received at the Dorothy Chandler Pavilion. This is the last major work by Birtwistle in Los Angeles that I can remember.

Although the composer with the most institutional support (if mainly in Britain), Harry remains the special case of the six. Young composers do not follow his style. It takes special performers to make his music as palatable as Boulez, Uchida and Oliver Knussen have shown. But I suspect the example of his fierce independence will make him grow over time.

Maybe it already is. A Generation X Festival presented and curated by Thomas Adès – who, at 52, must now be considered Britain’s foremost composer – paid a moving tribute to Birtwistle at the end of the first program on Friday evening by playing an exquisite piano miniature of Birtwistle, “Oockooing Bird”.

The LA Phil is surely the only orchestra in the world to have programmed these six composers of the great post-war generation not only over the years, but in this very season. For this legacy, thank you Bill Kraft.