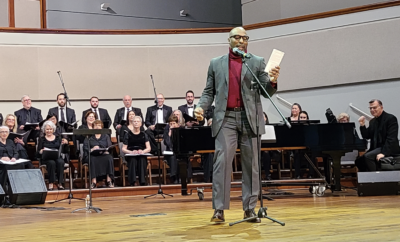 When you and your friends hear the opening of your favorite video game, do you think who wrote that music? Or when you binge watch BritBox, who wrote all the songs? And those commercial jingles that you really love or hate – someone wrote them too. For aspiring musical composers, having their music heard is often an obstacle on their path to success.

On Friday, March 18, the Montgomery County Choral Society took the stage for a special evening of music by emerging composers. As art director Dr. Robert Horton jokingly said, “The ink is not dry on some of these pieces.” As the sanctuary of First Methodist of Conroe filled with people, two of the composers featured on the program moved through the crowds, welcoming the family who had come to share the excitement, shaking hands with singers and other music teachers and enthusiastic attendees. Excitement was in the air.

Conroe composer Travis Redden took the stage to share his take on his very recent composition of Emily Dickinson’s poem, “Hope is the Thing With Feathers.” In the text, Dickinson reminds us that hope can be found even in the darkest of times, residing with resilience in the soul. The voices and the piano present a recurring melody, the “melody without the words” of the poem. “Hope is the thing with feathers that perches in the soul and sings the tune without the words. And never at all stops. And the sweetest in the wind is heard; and evil must be the storm that could crush the little bird that kept so many warm. I’ve heard it in the coldest land and on the strangest sea. Yet never in the extreme did it ask me only ‘a crumb.

When asked afterwards, Redden spoke of the journey of an emerging songwriter, saying “it looks a little different for everyone. This is especially true in modern times where composing is not just about writing music for ensembles, but can also mean composing in mixed media formats or for film, television and even video games. Redden said he was only 16 when he picked up a guitar and fell in love with it. After beginning his music degree program at Sam Houston State University, he realized that it was not the instrument itself, but the conduit that it represented for composition. It was the act of writing music that he really loved. “The truth is, I started composing before I even knew composition was an option – I started writing music before I even knew how to read music. I think all musicians are composers, singers, performers and teachers. We all have within us the capacity to wear any of these hats, but for me, the hat that suited me the best was that of a composer. What attracts me the most in being a composer is the storytelling component, in a way music is just another language and as a composer I can use it to tell my stories.

The program’s second play, “Life’s Mirror,” was written in the midst of the pandemic. Composer and music teacher Reginal Wright from Mansfield was present at the concert and took a few minutes to address the audience before the choir sang. “This piece was commissioned by the Conroe Regional Choir at the start of the pandemic in 2020. Masks were an unprecedented development for all of us in education – students were caught in the mirror. My desire was to use music to plant seeds of hope. I had in mind the parable of sowing and reaping. As I developed the music, I chose a form of call and response that moves through the different parts. The music also goes through a modulation cycle, but returns to the original key. The lyricist of the piece is Madeline Bridges. She wrote: “There are faithful hearts, there are brave minds. There are pure and true souls; so give the world the best you have. And the best will come to you.

In 2019, students in Los Angeles had the opportunity to answer the question: “What would you like to say to the earth?” Three of the essays were chosen, and a group of graduate students from Louisiana State University took on the task of putting those thoughts to music. Composer Mikeila McQueston, 24, is one such student and wrote ‘Dear World’, which is a collection of three pieces. McQueston addressed the audience via video. Dr. Horton chose one of the coins, “I will bless you”, which reads: “Dear world, I will plant flowers and I will not litter.” Dear world, I will pick up the things that are in my garden. I want to please you. It would be my honor. Dear World, I’ll be polite picking up in the grass. I will bless you. I love you, World.

Soprano Andrea Horton presented excerpts from another composition by McQueston, “Lucy Boyd”, a monodrama composed in 2018. Horton is a colleague and friend of McQueston. “Lucy Boyd” is inspired by the early childhood story of Pulitzer Prize-winning poet Edna St. Vincent Millay, who was filled with both a violent environment and a trunk full of books. The four movements of “Lucy Boyd” are “Elegy”, “Sometimes I Look Up”, “You Know…” and “Assured”. As the solo voice rises through the movements, the story unfolds about processing grief, reconciliation, and accepting that the heroine cannot change the past, but she can move forward with peace.

Soprano Lindsey Von Holten followed with composer Michael Patterson’s 2020 piece, “The Shattering,” which premiered at the concert as a set. Patterson reportedly said, “’The Shattering’ is a setting of three of Millay’s poems. The inspiration for this project was a memory of her poem #11, “Spring is here; and so it’s spring… But not in the old fashioned way. Patterson continues, “I found the sentiment of all three poems in relation to this terrible pandemic of 2020.” Millay wrote in a second poem, “The First Rose”: “The first rose of my rosebush budded, bloomed and broke. In the sad days when nothing mattered to me. The sorrow of sorrow emptied me clean. Still, it seems a shame no one saw it – it must have been very pretty. And the last poem in the set is ‘The Dogwood Blossoms’. It begins: ‘All dogwood blossoms are under the tree! Before the spring is gone – ah, the spring is gone! And there is no summer like you and me – the time of flowering is early, but no fruit develops.

The last of the emerging composers was Kim Andre Arnesen who wrote “Flight Song”, with lyrics by Euan Tait, a Scottish poet. The piece, which is about the human journey, was composed as a gift for the St. Olaf Choir in Minnesota, and it has since traveled around the world. Many spectators were familiar with this piece, which was recently sung by choirs in the region. Tait wrote: “Like a feather falling from the wing, fragile like a human voice. Scared, uncertain, alive to love. We sing like love. Frightened, uncertain. Yet our flight begins as a song. 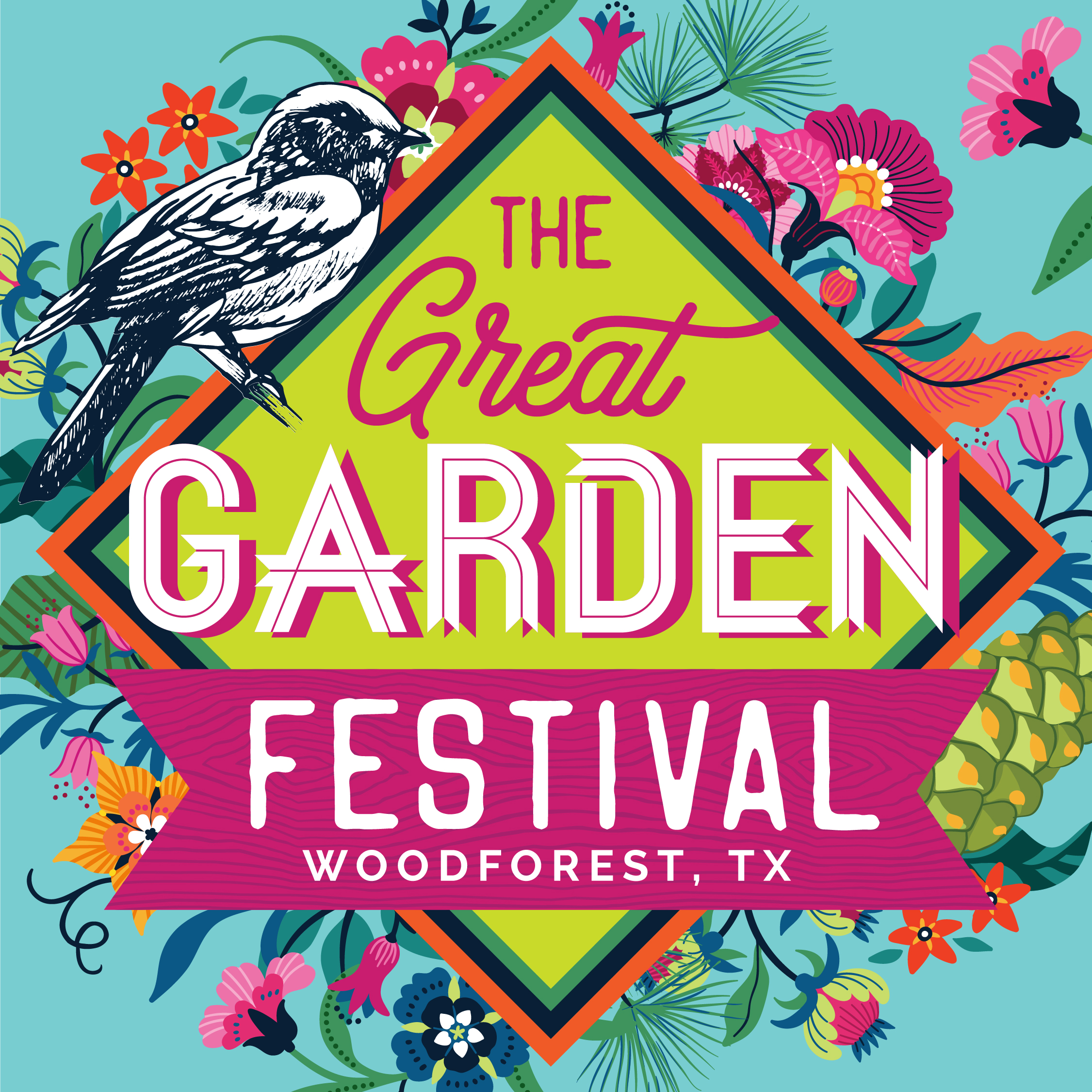 For Redden, and for all emerging composers, what did the showcase of emerging composers and the opportunity to share their music mean? Redden received an award from the Choral Society for ‘Hope is the Thing With Feathers’ which was an immediate bonus. But beyond that? Redden said, “One of the hardest things about being a songwriter, besides writing good accessible music, is finding bands willing to take a risk with your music. As composers, if we want to market ourselves, apply for PhD programs, workshops, camps, or jobs in the film or video game industry, we need to have good recordings of our music. It’s a challenge to get those recordings if most bands prefer to program Brahms. No disrespect to Brahms, of course, but bands’ propensity for programming “safe” tracks by established composers poses quite a challenge for new musicians. All this to say that there are no words serious enough to express the importance of concerts by emerging composers like this. What the Montgomery County Choral Society does for composers is amazing, and I’m truly grateful.

Horton took a moment to put the evening of choral music into context. “Two years ago, the world of choral music closed down. There was no music, even church music, in person. Sadly, we all remember the feeling that being together, singing together, could be deadly. For the Montgomery County Choral Society, tonight is a victory. Last May, we did the unthinkable: we performed an in-person concert in the auditorium at Willis High School. Then we had a gig here in October with two school bands, then the Christmas Singing Messiah, and now the Emerging Composer Showcase, which includes a world premiere. We must remember how far we have come. Tonight will advance the choral art.

The Montgomery County Choral Society invites everyone to join them for their 50th Anniversary Grand Final Concert on May 16, 2022 at 7 p.m. at First Methodist of Conroe. The concert will feature American composer Dr. Dan Forrest’s “Requiem for the Living”. Learn more on the Montgomery County Choral Society website at www.mcchoral.org or the @montgomerycountychoralsociety Facebook page.