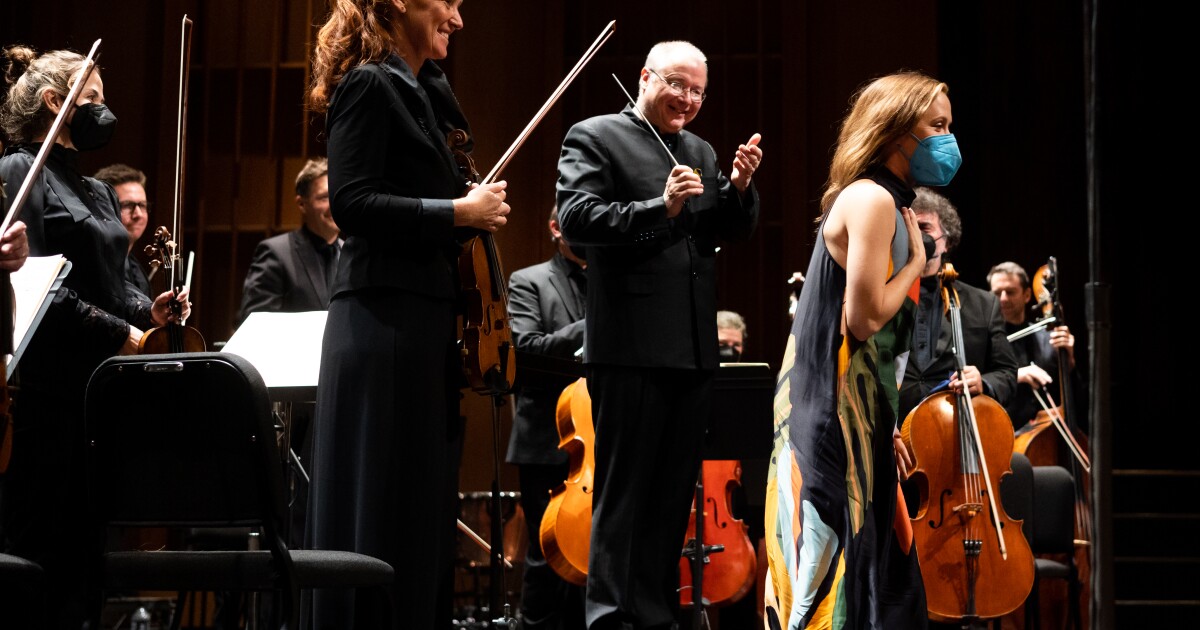 Review: The environmental impact of composers Ellen Reid and Gabriela Ortiz, inside and out

The plan was as follows: a unique Sunday in Los Angeles promised two major environmental-themed premieres by two famous composers who have long and special associations with the city’s two most important orchestras, as well as a walk sound for good environmental measurement.

That evening at UCLA, the Los Angeles Chamber Orchestra was to conclude the first full season of its celebrated Spanish music director, Jaime Martín, with the premiere of Ellen Reid’s “Floodplain.” If you brought a pair of headphones, Ellen Reid’s ongoing UCLA sound walk provided a perfect prelude.

“Floodplain,” commissioned for the end of the 2019-20 season, fell victim to pandemic cancellations, meaning, Reid told the audience, she put off writing the score for two years. By then, his perception of what “a lush and incredibly dangerous floodplain” might look like had “totally changed”. The unpredictability led, she said, to a very different score than originally expected.

This is the environment for you. I don’t know if she made those remarks before the Sunday performance. Upon learning that UCLA had unpredictably dropped its vaccination and mask requirements for Royce Hall, I changed my plan and attended the LACO concert on Saturday night at the Ambassador Auditorium in Pasadena, where the requirements remained intact.

The university had lifted its warrants just in time to mark the one-year anniversary of LA’s first live concert for an audience since the COVID-19 shutdowns began. On the same day as LACO’s Royce date a year ago, Dudamel and LA performed a special “Welcome Back” concert at the Hollywood Bowl for first responders like those from the vast UCLA Health network that many of us rely on. . The Bowl audience was distant and masked. Infections in Los Angeles were at a low of 200 and falling. On Sunday, at the new mask-optional Royce, and with Los Angeles Public Health Director Barbara Ferrer now urgently recommending the use of indoor masks, infections in Los Angeles were at least 10 times higher and were increasing rapidly.

The warnings came as no surprise to LACO. The orchestra found itself in the position of having to offer refunds to customers who did not want to risk Royce, as well as needing a last minute replacement for Martín, at his home in London with COVID-19 and unable to complete its first full season after all. .

I ended up trying the UCLA sound walk on Friday, on an unpleasantly hot and moody afternoon. The soundtracks are strange. They can take you out of the environment and into your own personal world, while making you aware of your surroundings in ways you might not otherwise be.

I walked onto the medical school campus, and Reid’s seductive strummed strings made me think what a slap in the face this lax UCLA policy is for its great medical institution. Gongs then guided me to the welcome rest of the campus botanical gardens, where medical students lingered in scrubs.

The soundscape evolves with its own inevitable unpredictability. Passing Royce and absentmindedly cooling towards an electronic drone, I nearly collided with a creepy, albeit cute, robot driving by that said, “I deliver to the Bruins.” The score reached a warm climax, then came to a dramatic halt, just before I reached Ronald Reagan Hospital, where they are presumably preparing for a surge in COVID-19 patients.

“Floodplain,” which is 17 minutes long, comes to you with its own environmental urgency. The floodplains themselves happen to be unpredictable ecosystems, formed by meandering rivers, filling and emptying in their capricious ways. They create nutrient-rich soil and, like so many of our activities on the lands we occupy, are threatened by unconscious environmental and health politics (UCLA has many companies).

How do you convey that in music? In an earlier piece, “Petrichor”, Reid – LACO’s composer-in-residence – evoked that long-awaited scent of earthy dampness that permeates the atmosphere after the first rain after a drought. For this, Reid convincingly invaded the concert hall with shimmering sound.

In “Floodplain”, the orchestra rises and falls, like a river of sound overflowing from its banks and then evaporating. Tremolos are everywhere, in lush strings and stinging winds and quivering percussion. Richly expressive solo passages for violin and cello could be heard like the living creatures on stage – probably not human, though, for they are too engrossed in texture to sound like aliens. Incandescent melodies, or hints thereof, emerge only at the end, alluding to harmonized floodplains in the environment.

At the LA Phil on Sunday, Ortiz also listened to the harmonies of the surroundings, as she has done in her nearly two-decade relationship with the orchestra. It started with Esa-Pekka Salonen premiering his 2002 “Altar de Piedra” (Stone Altar), a vibrant concerto for three percussionists and orchestra. The latest in his “Altar” series, “Altar de Cuerda”, is now his sixth commission from the orchestra. His fifth, “Kauyumari,” dramatically opened LA Phil’s “Homecoming” gala, celebrating the return to Disney after 19 months of the pandemic.

For Ortiz, an “altar” is an environmental construct, a reverence for our place in the world we inhabit. “Cuerda” is the Altar of Strings and was written for Dueñas. The concerto consists of three movements, each of which is an idealized altar. The first is “Morisco Chilango”, which means a Moorish native of Mexico Cityand begins, as Reid does, in a state of shimmering strings, but is interrupted by startlingly crisp percussive attacks and enthralling rhythm action of a city coming to life.

The beautiful central movement with heavy bass, “Canto Abierto” (open song), evokes a mystical atmosphere of the first Mexican churches. A bass drum resounds, deep strings give a musty cushion and timpani glide as if descending to the center of the Earth. Wind instruments are the wind. The shimmering solo violin does the vocals. A final chord in the orchestra sounds electrically charged.

“Maya Deco”, a Mayan decoration of bravery with a dazzling cadence, became a centerpiece for Dueñas. As a matter of principle, I try to keep adolescent musicians out of our coverage, and this especially goes for the more gifted ones, as they deserve the privilege of growing as artists without outside expectations.

It’s impossible here. It is impossible because “Cuerda” was dedicated to Dueñas but even more so because she is already an exceptional musician. Calm and discreet, she possesses this extremely difficult concerto. Its tone is thin but so deliberately focused that it carries easily. You can say he is determined, because when Ortiz asks for plum-rich, vibrant expressiveness, she delivers with flying colors.

If you want to get an idea of ​​Dueñas, who was named BBC’s Next Generation Artist, the UK Radio Service recently broadcast a rendition of her playing the Sibelius Violin Concerto in her Philharmonic Orchestra debut. from Liverpool shortly before flying to Los Angeles, and he is archive for a month.

KUSC is expected to move eventually to air Sunday’s LA Phil performance, which ended with Dudamel fantastically engulfing Disney in the full ballet score “Firebird,” with that mythical little firebird becoming another enchanted force of nature. The masks, meanwhile, remain at Disney, sure to mitigate a ruinous force of nature.