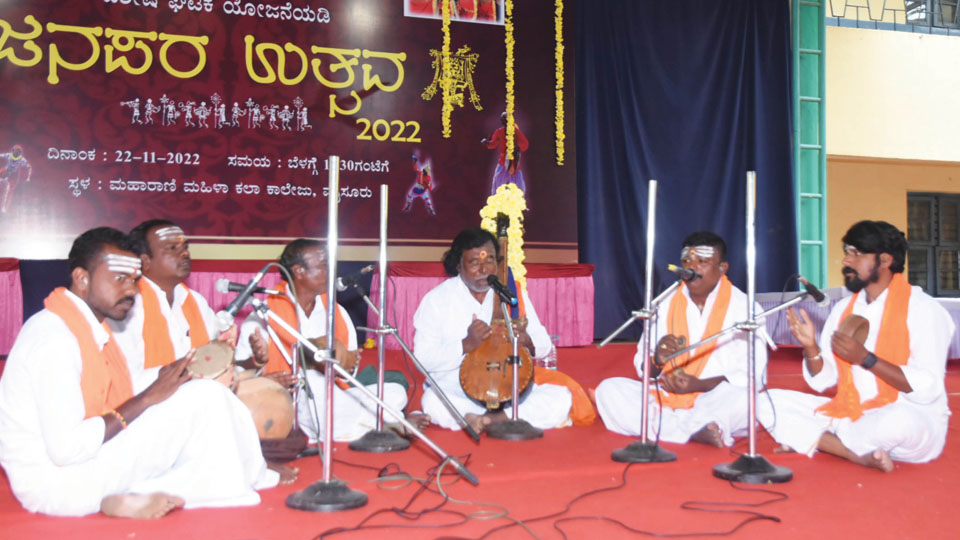 Mysore/Mysore: On Tuesday, the world of folklore was unveiled during the ‘Janapara Utsava‘, staged at Maharani’s Arts College on JLB Road here, as hundreds of College students danced to folk songs and also performed some traditional art forms.

The event was organized under the aegis of the Kannada and Culture Department.

Initially, folk troupes and College students marched in procession from Maharani’s College and passed through Vinoba Road, Shivarampet, D. Devaraj Urs Road and JLB Road before returning to the College campus, where the mega show, featuring a host of cultural events took place.

Earlier, renowned folk singer Dr. Malavalli Mahadevaswamy, who recently received an honorary doctorate from Mysore University, inaugurated the one-day event by lighting the lamp. Speaking after the inauguration, VN Mallikarjunaswamy, co-director of the Kannada and culture department, which spearheaded the programme, said a country’s progress can also be measured by the richness of its arts, heritage and culture. culture.

Emphasizing that women have left their mark in all fields, he said the event provided an opportunity for female students to discover their hidden talents and skills. Stressing the importance of arts and culture, he said it is everyone’s responsibility to promote popular culture.