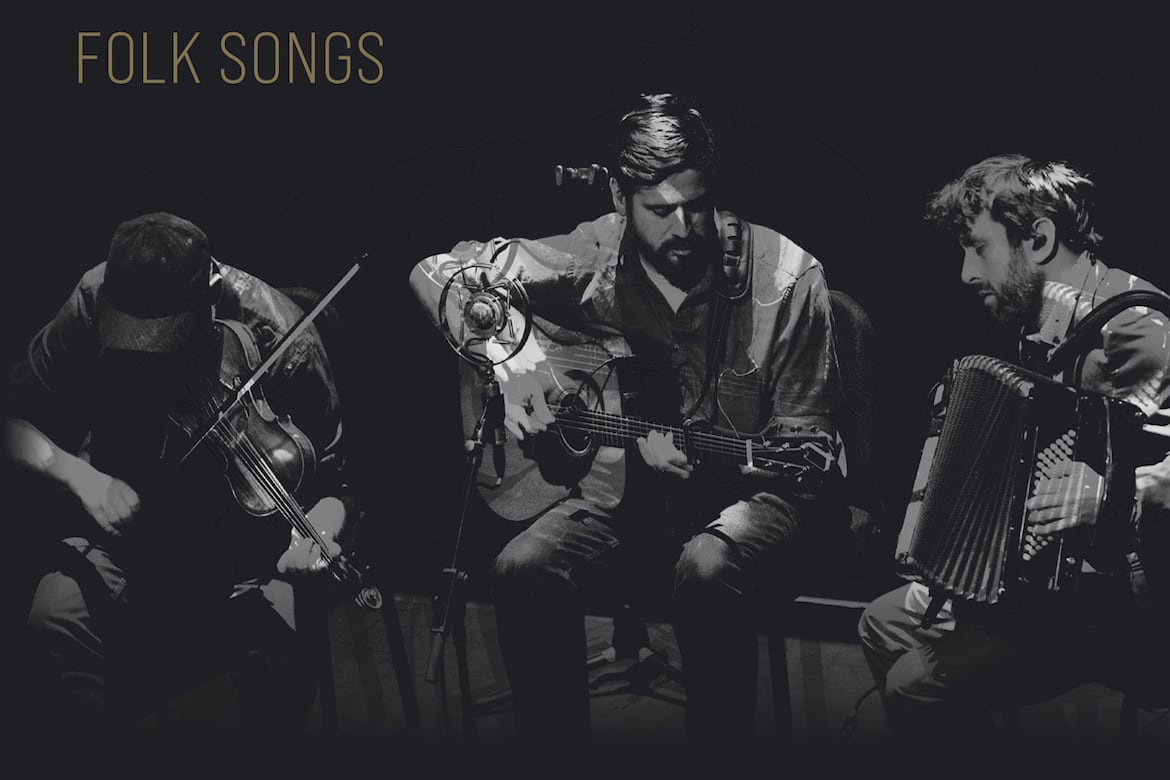 Fresh from their recent solo releases where the world is thin and The gate, Kris Drever and Martin Green join his companion LAU group mate Aidan O’Rourke on the accordion alongside the guest Inge Thompson on vocals for a very special EP.

Folk songs features five tracks, all traditional tunes delivered with the sensibility and superb musicianship long associated with the band. As the LAUs themselves say: “For 15 years now, we have been writing new music in the language and spirit of traditional song and dance. Our instinct has always been to keep pushing forward, to keep testing what elements can be woven around old idioms to make them new and keep them true. It’s our first real foray into the traditional canon proper, and what drives us is still the same. Why old songs now? Because 2020. Old stories feel important. Like all artists around the world, we were forced off the road and now felt the moment to reflect and re-found ourselves. We lived rather than wrote these five songs, and their emotional fire swept us away.

Recorded remotely at the musician’s homes in Edinburgh, Pathhead and Glasgow in Autumn 2020 Folk songs is a real containment project and a beautiful, and very welcome, one too.

Banks of red roses is an inspired and chilling take on the killer ballad, perhaps the best-known version covered by June Tabor. O’Rourke’s fiddling and Green’s production provide a poignant backdrop made especially menacing by Drever’s disturbing and evocative hiss in the final act.

Polly on the shoreinspired by Robyn Hitchcock’s cover of her 1995 album you and oblivion, is filtered by experimental and very effective devices. LAU plays with tradition with ease, never losing the thrust of the melody itself, but also not feeling trapped by it.

the cruel brother receives a Child Ballad makeover with effective haunting backing vocals from Thomson while Ca’ Les Ewes reinterprets Isabel Pagan’s poem, originally collected by Robert Burns. It’s probably the most traditionally played track on the EP, focusing only on the band’s instruments with minimal superfluous production. The song, an old favorite of The Corries, but also covered by Steeleye Span on their 1992 album Tonight is evening is an intimate and tender little piece.

final track The Witch of the Westmorelands is a beautiful cover of Archie Fisher’s song, first recorded on his 1976 album The man with the rhyme. Here, LAU layers the melody with evocative echo and accompaniment to create a truly poignant track. A memory of the past with a confident nod to the future.

All along Folk songs love of tradition comes lucidly to the fore, however, LAU is accomplished and confident enough to play with the pieces and make them his own. If this is a direction LAU is considering for future projects, then Folk songs promises many pleasures to come. This is a haunting and memorable rendition of a fine collection of classic folk songs. At just under thirty minutes in length, the EP may be relatively short, but it’s a perfect selection of a lush and alluring set of tracks.

Digital only via Bandcamp: https://lau-music.bandcamp.com/album/folk-songs

You can hear LAU’s performance Polly on the shore in our latest show: Lost in Transmission No. 64