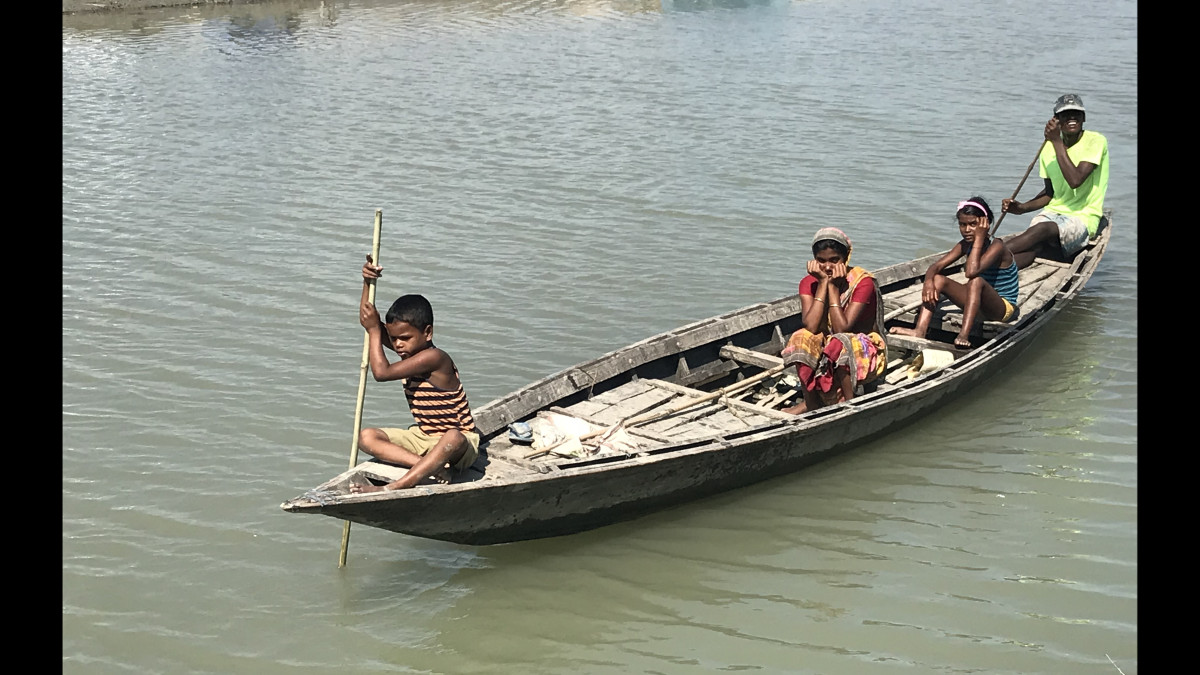 Musharaf Khan, 41, is a primary school teacher in Barpeta district, about 95 kilometers from Guwahati. Until about ten years ago, he lived in Tarabari char (sandbank) along the Brahmaputra and grew jute, rice and vegetables. However, for the past ten years, Khan has been a climate refugee, bouncing from tank to tank, until floods swept away his home.

My land, my farm have all been wiped out
And also destroyed me
Hens, chickens, cows and goat
Everything has been swept away
All I have left is a sickle
With the remaining juices…)

“Tarabari used to be a business center with people of various ethnic diversities residing here. However, due to flood-induced displacement, the once prosperous town of Barpeta has been reduced to a sandbar. Now Tarabari only remains in the imagination of the people,” he told Outlook. A year ago, Khan built a house in the district’s Borohi area, away from the river.

In another corner of the state, 90-year-old folk singer Swarnalata Deori belongs to the “Deori” community, one of the river communities in Assam. Most of his songs are about Deori’s story of migration across the Brahmaputra River due to flooding and erosion. She lives in Narayanpur, a small village located in the Lakhimpur district of Assam, some 390 km from Guwahati. She has seen floods since childhood and their changing nature.

“The floods used to be very scary. We made our stilt house a little higher to avoid flooding during the monsoon. My songs are mostly about losing my loved ones to a flood.

Songs are the only way she can preserve and educate her next generation about her past, history, culture and traditions.

Meghalaya is well known for its practice of shifting cultivation, known locally as Jhum culture. Practiced in the side tracks of the Khasi and Garo hills of Meghalaya, Jhum is not only a means of subsistence but is part of the life, culture and traditions of the hill communities of northeastern India where the agriculture is the main occupation.

In recent times, however, long dry spells and hot spells, late rainfall and reduced soil moisture have been a major concern for the agricultural production of these tribal communities. Therefore, farmers turn to professions such as mining, driving and security guards.

A fear of food insecurity due to the decline of agriculture is found in a folk song by the Khasi community in the West Khasi Hills of the state.

(Painful years ahead,
Farmers are shrinking
In this current advanced world with lots of gentlemen
The time will come when money will be abundant
where farmers are fewer and food is off)

Arupjyoti Saikia, an environmental historian based in Guwahati, believes that one can gain insight into the collective sense of local nature of various communities from a reading of folk songs. Many of them tend to reflect the ways in which communities deal with nature’s many lives and its disturbances.

“These folk songs also give a better sense of what climate means to a community. Climate can be related to water scarcity, warmer days, or fewer fish in a local body of water. Some folk songs can convey a sense of hope for better days or remedies for distress. Others can be ways to negotiate with lots of seasonal upheavals,” he says.

One such example is a ritual called Bhekuli Biya which means Frog (Bhekuli) Marriage (Biya). This is a ritual mostly observed by tea garden communities where a marriage takes place between two frogs to appease the rain gods during times of drought. One of the Frog’s (Bhekuli Biya Naam) wedding songs says:

In Assam, annual floods wipe out villages after villages in its geographical map destroy paddy fields and houses with loss of human and animal lives. A folk song recorded by Chandrani Sinha, a freelance journalist from Assam, expresses farmers’ concern over loan repayments to donors due to floods damaging crops.

This song, sung by the Tea Tribe community in Sivasagar district, describes how poor farmers were affected by the flooding of the Dikhow River in eastern Assam, a tributary of the Brahmaputra.

Talk to Outlook, Sinha, who archives folk songs among the communities living along the rivers, said: “The history, traditions and ecological knowledge of the communities in the northeast are not well documented due to various factors including the floods and natural disasters. However, through songs and folklore that are considered oral histories, you will find mentions of climate change and its impact on livelihood issues.

At present, Arunachal Pradesh is going through major deforestation due to the construction of over 150 dams in various rivers and also due to other development projects under the Act East policy. Deforestation has accelerated the effects of climate change in the form of increased temperature and land erosion, among others. Nyishi is a large tribal community living along the Ranganadi River. In various folk songs of the community, there is a mention of adaptation to climate change. In one of these songs, the community expresses their willingness to try different crops and farming methods using modern technology.

(Now the time has come to bring in the new harvest
of different crops namely, paddy and others.
Discover useful technologies
and outdoor cultivation methods too.)

In Mizoram, the land of the highlanders, there is a folk song about a farmer asking his devastated crops to rise after a windstorm caused them to fall and wither. The folk song belongs to the Mara tribe, an indigenous tribe that dwells at the southern tip of Mizoram.

Saikia says, “For centuries or millennia, societies have adapted to the local climate or nature in many ways, whether it be their daily lives, their cultures, their culinary practices, their housing needs, or their understanding of plants or their relationship with the animal world.

This is perhaps the key to a better understanding of the climate and to building a harmonious relationship with it.