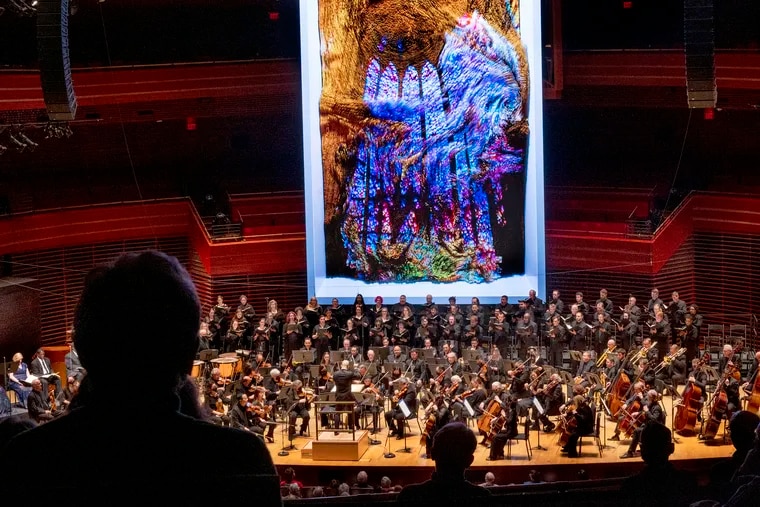 Yes, it was something of an artistic disaster. And yes, an interpretation of one of the most moving and enigmatic works in the repertoire came out terribly spoiled.

But the visually enhanced Beethoven of the Philadelphia Orchestra solemn mass Thursday night also served as a critical reminder: art doesn’t just deserve a chance to fail, it has to fail, at least once in a while. The research and development wing of most arts establishments is under-resourced. Epic failures are the cost of business if the art is to thrive and move forward. Try, fail and learn.

Thursday’s failure came in two forms. Quite expected was the visual element. The orchestra commissioned the artist Refik Anadol to create a computerized spontaneous response to the performance. On a large rectangular screen suspended above the stage, a series of animated images transformed into solemn mass. It was silly and irritating.

The most objectively unfortunate aspect of Thursday’s performance won’t have to be faced by this weekend’s audience (hopefully). Within minutes of the start of the “Kyrie”, a series of “pops” from electronic speakers sounded throughout Verizon Hall. Yannick Nézet-Séguin has ceased to direct. He left the stage and returned a few minutes later, apologizing and starting at the top.

Later, in the beautifully eerie and diaphanous “Creed,” another disturbance arose. This time the wandering electronic sound sounded more like a heavy metal riff. Nézet-Séguin stopped again. He stood for a moment, then returned to the room.

Disruptions were avoidable. The popping sounds were apparent even as the orchestra still gathered on stage. Someone should have fixed it then.

A spokesperson for the orchestra said the electronic explosions were caused by a power surge in an idle PA system, “likely related to tonight’s storm”.

The rest of the performance continued uninterrupted, but the damage was done. Much of the experience of solemn mass it’s that musical language is such a wonderful violation of norms that it creates a spell that takes you somewhere beyond. It couldn’t happen here. The orchestra is offering all those unhappy with Thursday free tickets to a weekend performance.

This orchestra, of course, has a long history of marrying images and sounds, going back to Fancy, and should be applauded for trying to push the concept forward. But it was difficult to find any artistic justification here. the solemn mass, for orchestra, choir and four vocal soloists, is rarely performed. Although widely regarded as a masterpiece, it has only been programmed by the orchestra four more times since the ensemble’s founding in 1900. Beneath the distracting visuals was a fine performance that struggled to draw attention ‘Warning.

The screen above the musicians is large, bright and high definition – so much so that it sometimes looks sculptural in three dimensions. Anadol has created a database of 12 million images of buildings that “Beethoven might have encountered in Europe”, according to a article on the orchestra’s blog, then used software that allowed artificial intelligence to listen to the performance and “dream”.

When it comes to imagination, artificial intelligence has a long way to go. There were a few images of cathedrals, stained glass or artwork figures that were brought into focus. But for the most part, the swirling, shifting images were abstract. At one point, the computer animation looked like rabbit fur. At other times, vermicelli and fried rice came to mind. The visuals rarely enhanced the musical experience.

And then: why? Is the solemn mass need yet another layer of stimulus piled on top? When does a masterpiece benefit from a response from another artist? Why is music not enough?

All the technical tics and antics surely rattled the musicians, and yet they managed to soar. The orchestra has brought together four vocal soloists whose sound and personalities blend and complement each other – soprano Jennifer Rowley, mezzo Karen Cargill, tenor Rodrick Dixon and bass-baritone Eric Owens. The Philadelphia Symphonic Choir, prepared by director Amanda Quist, had impressive immediacy and vigor.

To model both the orchestra and the chorus, Nézet-Séguin often used short, dry note lengths, providing an appealing textural clarity that allowed communication between the musicians, even across the stage. Some of the instrumental doublings with voice or other instruments were exquisite, and no timpanist could have had a more sensitive ear for dynamics and color than Don S. Liuzzi.

Concertmaster David Kim did a magnificent job in the famous section where the violin descends from the sky. At this point, I looked at the huge screen for inspiration, an acknowledgment of the beauty that unfolds in music. The artificial intelligence just seemed to shrug its shoulders.

All everywhere, all at once The composers Son Lux on their epic 49-track score [Interview]